Ever Been in a Jail Cell? - Picture 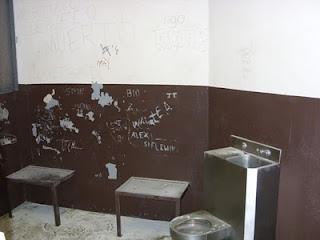 In my trip through the Old Wilton Manors City Hall, I got to wander through the entire building.

Why not?  They moved out!

But in this case, I got to see some things that I had never seen before.  In this case, it was a Jail Cell.

I have seen Cells on TV, and before the New City Hall was officially open, on the night of the dedication, I got to see the new cells, but it really looked rather artificial.  You just don't expect places like that too look clean and shiny!

After all, the Lavatory in the new City Hall was actually cleaner than the one in my house!

This looks more like what I expected the Cells to look like.   It was dirty from bug bombs that were set off, graffitti carved into the walls, and all sorts of grunge all over the place.   I'm glad I've gotten to my current age and was so very naive as to not have been in one. 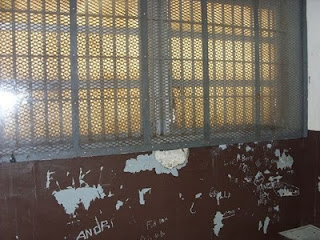 I guess that the folks weren't too happy to be in there, Right?

This was just a Holding Cell, according to what my friends on the WMPD have said to me.   Once someone gets in here and has a chance to go ahead and carve their names into the walls, they are sent off to the County Jail in Downtown Fort Lauderdale to have a chat with the Judges down there.

For the meantime, this place won't be used again for holding Drunks, DUIs, and other criminals.   They've got a nice shiny new Jail cell over at the new City Hall to carve the names into.
Posted by Bill at 8:00 AM