An Angel at Sunset Picture 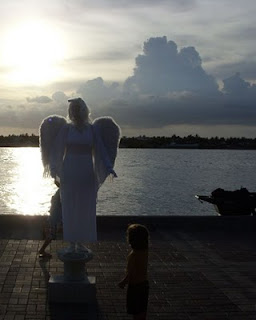 It is probably bad form of me to post this, but it does give you an idea of what goes on in Key West at Sunset.

Among all the jugglers, fire eaters and singers that have rolled downhill to a stop at the end of US1 in Key West, there's an island of quiet.   I was having trouble hearing what my friend and host had to say until I reached this bit of performance art.  Here, a woman dressed as an angel stands on a small pedestal.  She moves only very slowly.  When she moves, it is with an ethereal calm and grace.  One would expect that of an angel, and she did it well.

The little girl in the foreground was as entranced as I and the others were.  While she stood there watching the feathered apparition, the angel reached out, slowly to the child.  The child was too confused to touch her hand until someone said she could.  The look of awe was apparent on her face as she reached out and - gave the angel a dollar bill.

I guess even Angels Have to Eat.
Posted by Bill at 7:22 AM