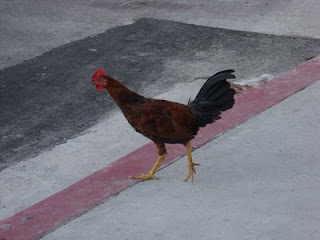 So why does the chicken cross the road?

In Key West you get to see why for yourself.

While down on "The Rock In The Middle Of The Ocean" also known as the Conch Republic I got to see this chicken strut across the street.  This was at the same corner as the bike on the balcony from the other day, so there was a lot of out of the ordinary happening all at once in one little corner of the world.

These chickens go about their business for the most part unmolested.  The city of Key West goes through periodic fits and starts about clearing the island of the birds but for the most part nothing happens.  Why?  Because of a healthy dose of laid back anarchy that goes on under the surface on the island.  After all, they're descended from pirates.. er "Wreckers" and the chickens were their game cocks and not pets and certainly not raised for food.  Too tough I've heard it said.

It certainly gives the place a bit of an exotic air about it.  I can't imagine raising chickens here in Wilton Manors, someone would get all fussy and have a "hissy fit".  I know it was actually legal to have them in Philadelphia but I didn't want the extra work.  After all, the Parrot I have is certainly enough mess.

It's nice to have them down there.   After all, you don't often get to see a hen on her eggs under a small bush at a traffic light.  They don't seem to be terribly afraid of the tourists and for the most part they are harmless.

Except for the occasional 5am wake up call...

Not having been raised on a farm, I didn't realize that the birds will call in the middle of the night.  Walking out of a bar at 2AM and hearing Cock-A-Doodle-Doo was a bit different.  Hearing someone shout "Shut UP!" was worth a laugh.