Sometimes the Camera Phone is just enough camera.  Polaroids were never the highest quality pictures, but the foggy or slightly out of focus pictures that mom would get out of her camera were just right for the family subject matter.  This morning I remembered that I hadn't remembered my good camera so I took these shots at sunrise of the demolition of old City Hall.   The building is down now, all that is left is the concrete slab and the rubble. 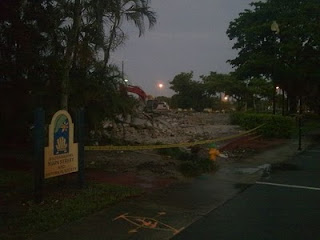 As the sun rises on a new day, the old sign of the Historical Society and Wilton Manors Main Street are about all that is left standing of the old building.  Having run into a "Dog Friend" with her Golden Retriever and her little black mix, she described the site as her "Nuclear Bomb Site". 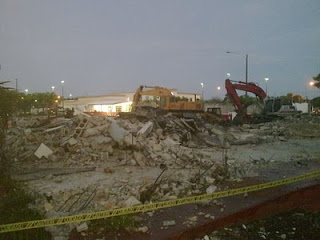 We walked for a bit and talked about the Bomb Site.  She didn't know that this view of the Commission Chambers with New City Hall in the background would shortly become a new temporary parking lot. 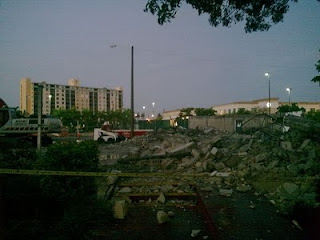 We stood in front of the main entrance looking toward Wilton Towers and chatted for a while about the possible plans.  Temporary parking lot will go up shortly.  Within two weeks of the site being cleared of the old building, they will begin work on the grading and asphalting of the plot. 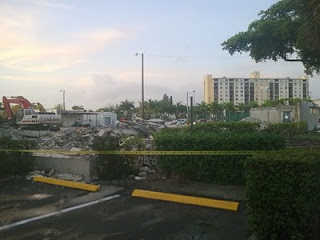 Looking into the Police Doorway is very different now, but we can see where people will be leaving their cars.  If the Tiger 2 grant is given to Wilton Manors, I would be looking into someone's studio apartment window instead of at Wilton Towers. 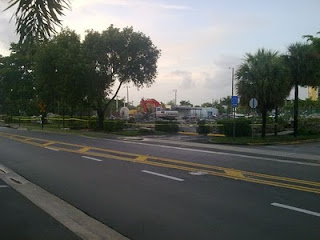 This view from the corner of NE 21 Ct below Wilton Drive could have another couple hundred people living in apartments and working in shops on the Drive in buildings that "wrap around" a parking garage. 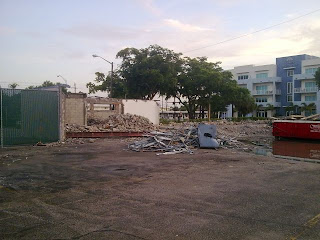 About all that is left of the building is the corner where the Police Gym used to be.  That corner and the steel door are most likely to be gone by tonight. 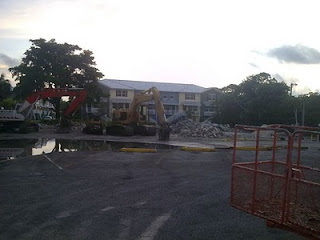 This view was of the part of the building where John Bold's remains were.  Inside the building was a piece of wallboard that were marked with a big "X".  That was John's resting place for a few years.  Now he and the building both are resting together.  Soon John's residence will be replaced by parking and hopefully apartments and a garage.  He'd have liked that improvement to the business district, I'm sure.
Posted by Bill at 8:22 AM