Dancing at the Museum in Key West - Picture

Right off of the water, next to where the Angels land and the Fire Jugglers try not to burn the five year old children from Ohio, there's a little museum.  The building itself isn't all that small, and coming from a big city in the North, it only seems like it is a small museum.  On the other hand, there is a wonderful collection of Public Art there.

In Key West, which is a small city, on a small island, on a small planet, there is Public Art.

There are traditions of public art in many large cities.  If you have a collection of people that crowd into a small place you create the economies of scale that result by simply not having enough space.  Key West should be one of those places.  When you have that situation, you can make certain assumptions.  The assumption is that people have a higher standard of living when there are artistic expressions easily visible.  Think of Paris with the Place de la Concorde, Philadelphia with art literally everywhere in Center City, Chicago on the loop with the Bean off of the Chicago River and the Calder Mobile.  These things happened because there was a conscious decision that there is more to life than concrete and commercial space.

In Philadelphia, there is actually a requirement that a certain percentage of the value of the building is spent during construction or re-construction on public art.  The result is a massive collection of art.  Walking through Center City Philadelphia is like walking through a giant museum of modern art.  Then they take the stuff they can't leave outside and put it in a big barn of a building on top of a hill and let some guy run up the steps.

I think his last name is Balboa.

The next best use for those steps is for tired inline skaters to congregate before their next 9 mile run, trust me!

When ever I go somewhere, I consciously or subconsciously look for public art.  I have found that the quality of life in that city is directly proportional to how many "Pretty Pictures" you can spot by driving down their main street.  Compare "this" city with "that one" and you'll realize which one has a better art scene.  I'd expect Austin Texas to be a better place to live in than say ... Brownsville. 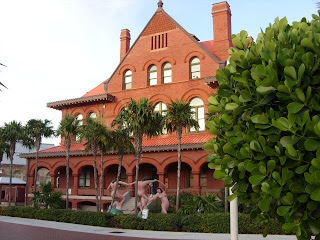 Last trip to Key West was a Working Vacation.  I spent 3 days in a Conch House in New Town doing Virus Remediation and got all the machines back up and running.  When that happened, we took a walk down to see the sunset and I noticed that building.

You see, in Key West I didn't notice much public art that really wasn't more like a shop display.  When I got to this spot I stopped.  Stuck to my tracks, I thought "This is it, I'm home".  Sure, its naked women dancing outside the Children's Museum, and had some real warm flesh and blood women been doing that, there would have been a bit of a "discussion" happening, but there it was, public art in a small city of 30,000.

I can't really call myself an Art Lover.  I have been to the Louvre, seen Mona Lisa, the Bayeux Tapestries, visited the Philadelphia Art Museum and the Rodin Museum on The Parkway in Philadelphia, but I hadn't realized how much I missed it until I got to see these beautiful pink ladies, prancing in an expression of joy.

At least that was how I saw it.  After looking at the picture above, I'm smiling and thinking the same that I did then.
Posted by Bill at 8:29 AM