The Calm Before the Party

Walking around Wilton Drive at 6AM, I was struck at how many preparations were staged for the coming Stonewall Street Festival.   It really did look like the calm before the storm.

At 6AM on a given Saturday morning, there usually is next to nothing going on.  I expect quiet.  I could have had it if I hadn't been listening to a Historical Biography on the iPod and probably would have had a better walk.

Not that anything went awry, but I had noticed that the lines were being drawn for tonight and tomorrow.  There were barricades at most intersections waiting to be deployed, caution tape was up, and signs saying 'No Overnight Parking' were quite common.

Continuing past the Gables at Wilton Park I was reminded of the party last night.  It was a reception that was held from 6pm onward in one of the unoccupied commercial spaces thanks to the generosity of the Gables Company.  They're a wonderful neighbor and are truly going out of their way here to help out to make things better.   From what I saw of their development in Mizner Park in Boca Raton, Gables have succeeded.

Once we come out of our Republican Induced Second Great Depression, hopefully those will be the first shops to fill.  Seeing them now shows their quality of construction and the location is excellent in the heart of Wilton Manors.

The reception was for the Stonewall Museum here in Florida and I was glad to see it.  It had pictures of gay and lesbian couples who have beat the odds and managed to stay together for 20 and more years, with one couple having around 48 years together.  Quite a difficult thing to manage when the country you are in is outwardly hostile to your relationship.

In the back of the rather large space was a timeline showing the highlights of the Civil Rights struggle for Equality that the long push Gay Rights has become.  Back to the 1800s and through to the current day, you could read about the days before Stonewall, the AIDS pandemic and how people have banded together, both gay and straight allies for a common goal.

I was glad and surprised to finally get to see one particular display that I have only seen in pictures.  Actually, I have seen the Names Project AIDS Quilt in display before.  It has always been moving, the 3 by 6 foot slabs of cloth roughly the same size as a grave with some graphics to illustrate the departed's life. 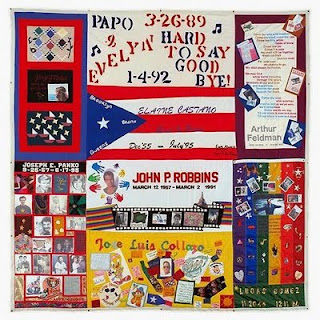 In the case of one particular piece of the quilt, I was stuck to my place standing for quite a while.  I have seen this particular quilt many times, the graphics popped out at me with the name "Joseph E Panko" in bold white letters on the lower left corner.   For some reason that piece has stopped me in my tracks before in print in many places and I have finally gotten a chance by some random circumstance to see it in person.  I've seen this particular quilt in books, in media, and on posters and now on the wall.

It got me thinking back to the dozens of friends who passed before, in waves in the 90s and earlier in the 80s before the medications that finally hit the market gave them a hope to live a bit longer.  Whenever that happens, I think of my cousin Wayne who died back in the early years before there was any treatment or hope.

At that time it was a death sentence.  He died in the first 500 in this country in New York City in the early 80s.  Back then nobody knew how it was transmitted, how to cure it, or even what to do about it.  There was panic and confusion, typical when people don't have a clue how to act, unfortunate to say the least whenever it happens.

It has been years since Wayne passed, he'd be in his late 50s now.  He was the first of many people who I knew who "had it" and died from it.  More will go in the future, although the rate of people coming down with it seems to be slowing.

Now we know how it is Acquired.  That first A of AIDS.  We all have been well educated on how yet people still come down with it.  The "kids coming up" these days are educated from an earlier age about these sort of things as well as their sexuality simply because they have to.   Unless they're from a traditional area, there is no reason not to know.

It's a lot to carry on your shoulders, but in the history of human kind, there have been epidemics and each went through the same sociological steps from fear to acceptance to cure.   We're waiting for a cure.  Telling someone to play safe is trite, and abstinence is a non starter of a joke.

So walking out of that place I just had to think that parking issues and getting people together to celebrate civil rights wins and to party was only a mere sliver of what this is all about.

It is of course a time for people to get together with their own kind and with their allies outside of the community.  Hopefully it will be more than just a party.
Posted by Bill at 10:19 AM