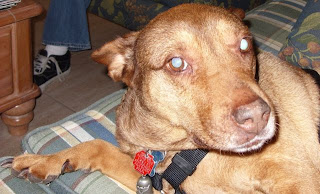 This is Anabelle.   This picture was taken about a year back, "red eye" and all.   She's a pit bull, or at least a partial pit cross.

Despite the reputation of the breed, this dog would win you over in a heartbeat.  She's an absolute love sponge, in fact she's so loving that she would not leave my side during the entire time of that visit to my Godmother's place up in Wellington.

Kathie told me a while back that Anabelle was sick and they found out that she's got a tumor on or near the Liver.  The problem is that in dogs that particular area is apparently tough to work on even with a skilled surgeon.  The prognosis is not the best.  The operation could take place and it would just throw fuel on the fire.  On the other hand, it could be that it could extend her life another couple years.

This pitbull A.K.A. Love Sponge met me while I was a snowbird, shortly before I moved down here permanently.  She's loved and lived there for around 10 years since she was found wandering around a parking lot in Delray Beach looking chewed up from fights.  Her hard childhood showed on her when she would wince when your hand would come to caress her and give her the attention she deserved.

She got the attention she deserved from the non-dog-person who was my Godmother and her husband Larry and all those who met her.  She even tried to climb into my Jeep to come back home with me that first time she saw me.

So now, she's not doing well and I'm waiting to hear what they will decide is best for her.  It's hard to know and I won't second guess the decision.

There will also be the grieving process that we all have.  It's one of those things that if you never had a dog, you can't understand the bond.  There are some Police Departments who have had to put down K9 officers because the Human partner had passed in the line of duty.  The bond is that close on both ends.

I didn't know myself until I had gotten my own ex-stray, Lettie, how touching it could be to have a wet nose on your knee at 6AM.

Those of us who are untouched by the love of a dog, or another pet for that matter, simply don't know what they're missing.