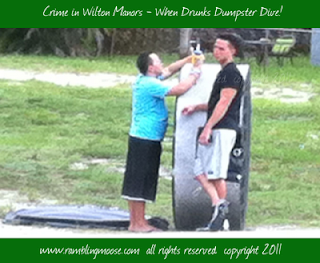 For years, in the Shoppes of Wilton Manors, there was a thrift store.  Poverello was a great place to get odds and ends at a deep discount even if the place was dark, dirty and dingy.  They have since moved away to new digs on Dixie Highway, about a half mile from the old store.

The old store would collect bags of donations that would mysteriously show up after hours.  Sometimes great piles of furniture of questionable value would show up in front of the place that would leave us scratching our heads and saying that it's just going into the dumpster.

That dumpster also collected donations that were in no way sellable.  There have been people coming into the back parking lot for years and dumping their cast offs because they didn't want to pay for the trouble of getting a bulk trash hauler to pick up their worn-out garbage furniture that is missing a leg, cracked supports, or just stained.  Some of the things that were out front as a donation were downright insulting, the pieces that ended up out back were usually even worse.

After Poverello moved, the "donations" to the dumpster slowed but continued.  The dumpster was quickly removed so the dumpers would merely leave things in the spot that the dumpster was at.  For a while the gate to the back lot was closed and locked which stopped the growing pile, but parking is too scarce a commodity here so recently the 20 or so free spots were opened up with the gate on "Bar Nights".

It was on one of those bar nights that it arrived.   A giant styrofoam drink cosy that someone thought they could leave back there.   It was the insulation and support for a hot tub.  Junk came and left that corner, but the giant 5 foot plus drink cozy stayed there.

Around dinner time, they came and spotted it.  In their alcohol fueled minds they thought it might be something useful so they began rolling it out of the back lot and down the street.   Getting about 250 feet away, they stopped at a vacant lot and rested.

After all, when you roll a giant black styrofoam donut down the road in a tropical climate on a summer night, you get tired.

While they rested they drew attention.  We called the Wilton Manors Police dispatch to let them know what was going on while all the neighbors came out and watched one after another.

One neighbor took his puppy out for a walk at that time.
We took the picture here.
Another was watching outside her window and then called us when the police appeared.

No, we're fine, but we did call.  We have a very cohesive block on this end of the street.  We tend to watch out for each other, trade recipes and baked goods across the fence and the street, watch over each other's dogs that sometimes get lost.

More neighbors came out.  The giant drink cozy was doing its job, giving the guys a place to lean.

They got on the phone and apparently called for reinforcements.  They arrived just before the police officer did, white panel van in store.

When the police came to the door we filled him in and he went out to investigate.  It seems the story was that these two drunken guys acting like frat boys saw this giant donut and decided to roll it home.  When it got too heavy, they stopped, sipped more drinks from their "Fat Tuesday" party cups, took some video footage, and called for the van.

They were trying to stuff this monster into the van when the second policeman arrived.  More of an amusement than anything else, they all stood around laughing and shaking their heads as they realized the thing was just too big to stuff into a van.

As the second officer left, they weighed their options.   Problem solved as they rolled the giant down the street like a tire toward their later destination.

For the most part Wilton Manors is a predictably safe place to live.  When Crime visits, it comes in from Fort Lauderdale and rolls down the block.  Sometimes with a sippy cup and a big donut.  Other times, it's different opportunistic things.  You just have to watch yourself so you don't get run over by a run away hot tub.
Posted by Bill at 10:08 AM