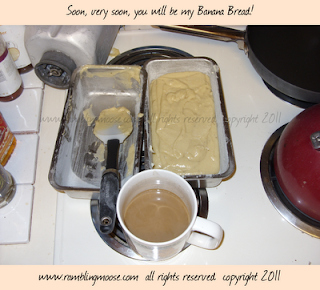 Yesterday was busy, why should today be different?

Today, getting up before 6am, there was a flurry of activity.

The Linens were put into the washer, and true to form it took longer than expected.  It's a Bosch Washer, so while it gets the clothes clean, it has a problem figuring out how much soap actually needs to be in the water.   Add too little and you notice things aren't quite right. Add the soap manufacturer's recommended amount and the idiot washing machine decides it needs another cycle saying "Extra Rinse Foam" and delays another 30 minutes.

The morning mile and a quarter dog walk was done, we walked into the kitchen and begun the morning meal.  At the same time there was a long list of food and drink being prepared.

Coffee, Tea for Iced Tea, two bowls of Oatmeal all received boiling water and were steeping and soaking.

There was a batch of Decaf being roasted at the same time.

An English Muffin had just come out of the microwave, and into the toaster.

The Chicken Patty was dusted with Curry Powder and then warmed in the microwave.

Yes, all of this was breakfast.

When things settled after the coffee was roasted and cooling for later grinding, it was time to further complicate matters.  Banana Bread had to be made.  The bananas were not all black, but picking one up and you realized that they weren't exactly holding up well.

Ever have a limp banana?

(No, not that kind, a real Cavendish Banana and overripe at that so get your mind out of the gutter!)

Walking to the front room, the laptop was started, the recipe found, and the banana bread was prepared as above.  While all of this happened, the laptop was going to windows update and getting all the latest updates.

Everything except Silverlight.  This laptop HATES Silverlight.  Silverlight is something even Microsoft has decided should die because they are no longer actively pushing it to people.  It is a "Flash Replacement" that does the same things Flash does but does not actually do Flash animations.  Yet another layer of software that you really don't need.   It uninstalled from all my windows 7 computers since it slows the world ... to ... a ... crawl.

The bread was placed in the oven and timer set for 30 minutes, which gave a nice breather to begin to eat some of that feast.  While it was only 600 calories, it is a lot of volume.

The bread began to warm the house with Home and Hearth types of smells, and it rose beautifully to a proper density. 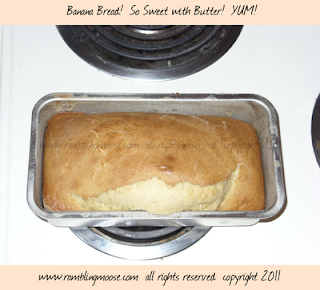 Pulling the bread out of the oven, the results were quite fine.  Thin crust of tasty creamy goodness.

It was time to let it cool, go into the front room and begin the morning Job Search.  170 Web Pages of work goodness.  Dice.com, Monster.com, and Careerbuilder.com all done in rapid succession.

The search was going fine, but there were signs of strangeness coming from the laptop.  The poor little thing needs attention.  There is something not quite right with the software and nobody will be able to fix it but me.  There's a driver that crashes when I shut the thing down so it never gets powered off cleanly.  When a disc check is scheduled on the boot drive, it never happens because there was not a clean shut down, so it simply restarts.

Add to it that those two pictures above were not available because for some reason the poor little HP decided it would take a vacation and not read the USB Drive.   Not good, there are pictures on there that are needed for the projects that are outstanding!

Fine, shut down the laptop, then it decided that it wasn't shut down, the driver was still crashing, so it would restart.   This Time However it now is going to do that check.  Here we are an hour and a half later and it is still scanning its hard drive - no errors so far.

Time to get out the blog posting though, so walking over to the Video Editing Laptop, it was time to start doing some work.

No problem, it is marginally faster than the little HP, and there are some Powerpoint animations that need to be made for New Divine Mercy so they can be married to the videos on the video page on their website.

Yes, that is me, Videographer as well as a Photographer, baker and all around Project Manager good guy.

Need help? I'll give you a good rate.

Need proof that a guy can Multitask?  Join me in the kitchen, we'll make coffee and another Banana Bread.  There is this pile of bananas that aren't getting any younger.

So shall we make it plain?

That bread by the way... it was underdone inside.  That is what you get when you think you know your oven!
Posted by Bill at 11:34 AM