I Am Lizard, King Of The Tennis Ball Mountain 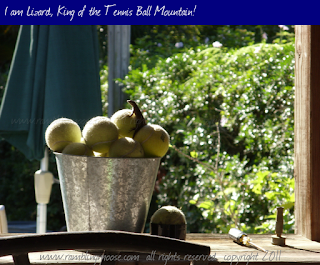 After walking to the kitchen for an unscheduled snack, I found my picture of the day. I really didn't intend for today to be a picture but this was as good as any.

I was listening to Vivaldi's Four Seasons on the headphones after walking the trash out to the bin and found myself looking in the refrigerator.  After having a small handful of Moosemunch... no really, only 10 pieces.  Very small handful.  Honest!  Yes, they named it after me!  Who else?  (Smirk)...

I looked out my kitchen window and saw this lizard looking back at me.  The usual Cuban Browns and the proper pink Geckos that live in my yard are very shy and will run away, so I grabbed my camera not expecting the shot.  This being a Curly Tail, it stayed put.  They're noticeably more bold than the others.  It stayed there being King of the Hill while I got a picture through the window, opened the window, then got another shot.

Walking over to the back door I laughed at myself silently thinking I may be able to convince it to stay put.

Nope, not that bold, that second shot wasn't going to happen, Mr DeMille was not going to get his close up.  Sure, I could use a digital SLR but they don't fit in my cargo pants... however if you have one around make sure you don't need it since I'll put it to use.

Begging for cameras aside, it dove into the bucket as soon as I was framed by the back door.

Opening the door I walked over to the little bucket full of tennis balls and took them out one by one.  The balls are there so the dogs can play with them, although my own Lettie is too old to care now.  Taking them out one by one, there were around 20 left.  When I got to the last three, my little lizard was getting unhappy with me and decided that it was time to hide.

Scrabbling around the bottom of the bucket the little guy ran around circles until it literally flung itself out onto the bar.

Sorry, no beer served at 10 in the morning!

It must have been disappointed in my lack of bartending skills as it did pushups on the bar while glaring at me then diving off into the Hibiscus on the deck.

Never a dull moment when you have to take the trash out!
Posted by Bill at 10:24 AM