Our Very Own Attack Gecko 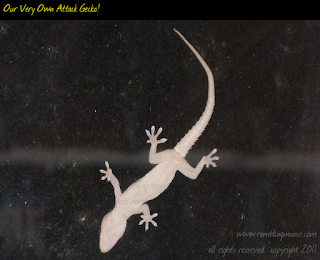 Yes, we have an attack Gecko.

Some have attack Dogs.
Some have attack Cats.
I have seen attack Ducks and Swans.
My own Parrot will lunge at you if he doesn't like you.  I know that for a fact as half the time when I walk past the cage he's lunging at me for not giving him that piece of orange out of the morning oatmeal.

They remember, they really do.

Last night we had quite a lot of lizards on and in the house.   It started when a little adolescent Cuban Brown Lizard was seen crawling down from the ceiling to hide behind the mirror on the wall.   They get in by hiding in the crack in the front door where they can jump out and get a tasty meal in a Moth that is drawn to the light.

So getting the patented Gecko Extraction Tool, we relocated the little thing out to the front garden where he'll live his days out hunting for critters.

After putting away the High Tech Gecko Extraction Tool (TM), I went into the kitchen after being called.

Hey there's a big one out here!
A what?
Oh, a big Gecko on the window!  Bring your camera, this one is practically Prehistoric!

Hyperbole aside, yeah it was a big one.  About the length of your finger, and as you see quite pink.

I had left the kitchen light on when I was making dinner and the bugs are drawn to the light and warmth of the Lanai.  Since there was a lot of rain recently, we've had a bloom of bugs.  Many Mosquitoes being eaten by Dozens of Dragonflies, being hunted by gillions of Geckos.

Gillions is a word, right?

Seeing that I'm entertained way more than I should be, I got out of the big green chair, walked to the camera, pressed on and focused.  These Geckos are quite shy and I'm surprised that it put up with the fuss we were making.  But I did get the picture and realize that I really do need to clean those windows.

Great.  Dirty Windows and I'm sharing it with the world.   I guess it is true, I can laugh at myself.
Posted by Bill at 10:13 AM