Mining Your Pictures For Memories 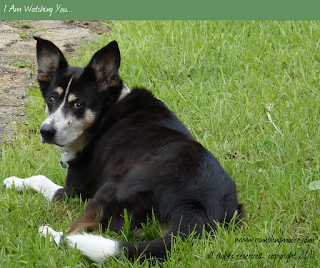 Going through my pictures this morning I realized I was taking quite a few lately.  I also noticed that there were certain ones that I thought could be better.

Last week my daily brain dump was about redoing the windows and lubing them up.  Mrs Dog walked outside and refused to leave.  Knowing she was not normally allowed to be off leash and out front, she watched me for permission and beckoned me to come outside.

This morning I saw myself stop on that picture again.  I realized that it wasn't quite right the way it was framed.   So, I took some scissors to it.

In fact so much better that it has been printed on 8.5 by 11 photo stock and will be framed.

That is the kind of thing that "back in the day" took a lot of effort to do.  Negatives and Darkroom equipment meant that getting the photo printed just right was a Dark Art.  There were cadres of people who knew what to do with odd lighting, ascetic acid, tongs and photo paper that was stored in a dark box in a room that always smelled of vinegar.

You could get your perfect picture of the wedding minus that bird that flew through at the wrong moment, but "it'll cost ya!".

Now with a low end laptop, and some free software, all you really need is a good picture file and it can be yours.   Don't forget the Good Paper and a Good Frame.

OK it wasn't a low end laptop when it was bought but that's neither here nor there.

Hanging in my bedroom is a newspaper photographer's shot of me feeding Mrs Dog a morsel of food outside of a street fair a block from my old home in Philadelphia.  It was an honorable mention in a contest, and I liked it so much I bought a copy from the photographer.  Great shot.  Took talent on the photographer, being in the right place at the right time, and the fiddly art of Film Photography.

I don't know about you, but I haven't taken a Film Photograph since the 1990s and maybe before.

Many people can say the same thing, and that is why we lost great technology companies that concentrated in one business line like Kodak, Polaroid and others over the last decade.  They didn't diversify properly and are now a shadow or struggling to hang on.

With a cast off laptop, and my bargain basement 8 Mega Pixel Camera, I can do what a full fledged darkroom did back then.  You can too, with a little effort and the right (free) software if you have a mind to.

Then you'll find yourself mining your own pictures for your own art.

I am just lucky enough to have caught the dog in the right spot.  She may not be art to you, but she's hanging on the wall in the most important art gallery I know.