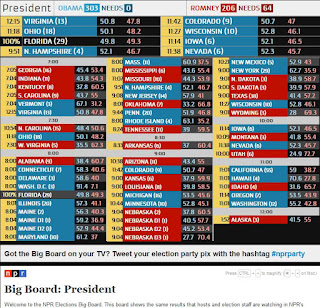 Just like many of us, I couldn't get to sleep.

I spent most of the evening skipping between the BBC, NPR, MSNBC, Miami Herald, and some of the other news sites looking for some information about this little election thing that happened.

BBC tends to give information about the US that is a little more "raw" at times since US media are either not allowed to disclose or decide not to for the sake of people in other areas.  I had voted a week before so that didn't really matter to me.

By the time the returns started filtering in it was a see saw battle of who was in front at any given time.

Finally after waiting for a computer backup to complete, I realized it was after 11 in the evening and having been up since 5 in the morning it was time to go to bed.

I gave the news sites one more pass and concluded that I couldn't change the results and it was going to be close.

Sleeping the computers, I got the dog up to go out front for one last sniff.   Staring up at the skies, I heard my neighbor Theresa.   She's a couple houses down and in the clear crisp quiet of a November night, she said to her husband that "ABC Just called Florida for Obama".  Less than a minute later "AP Called the election, Obama's Won!".

Theresa and her husband danced in the moonlight in front of their apartment and that made me smile.

If you have ever been in a stadium you may have experienced this effect.

I am near Wilton Drive.  I was standing a couple blocks away from it, roughly in the middle of its curvy mile.

As it turns out it was the perfect place to experience this outpouring of joy.

From the Drive, the bars erupted one after another with cheers.  My distance from them a perfect spot.  Where I was the sounds passed from one side to the other as if some great Celestial DJ was playing with the balance control.  From one ear to the other as each bar's sound hit me, it was a great sound of relief and joy.

After the bars calmed down, the cars on the streets begun to sound their horns and a few people in the distance started firing off firecrackers.

Then the fireworks started to report from Fort Lauderdale across the Middle River.   Cracks, pops and flashes all interspersed with sounds of joy.

I gathered up my dog, too old to hear the sounds in the distance, and went inside.

They Called The Election, Obama Has Won.  Montgomery Burns will go back to his little life and not get his extra Ivory Backscratcher.

After all, every election needs a Simpsons Reference.

This morning, it all seemed a dream.  Just to "pinch myself to see if I was awake", I checked the Big Board on NPR.  Big Bird would have a job for another four years, NPR had confirmed what I heard from Theresa last night.  Obama Has Won.

One last state had not certified their results as of that time, 7AM.   Florida, my adopted home.   They really should change the state motto to:

Welcome to Florida.  The Fix Is In!