Cactus in a Sneaker or just Athlete's Foot? 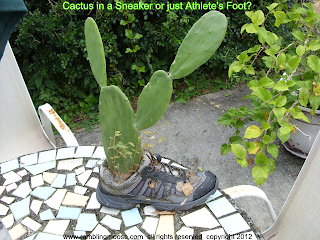 You have something growing in your shoe.
Did your Athlete's Foot run amok?
Why is there a cactus growing in the sneaker?
Ok, that's just COOL!

That's a sample of the comments I get from my cactus.   I have two, although this is the nicer of them.  The other one had a mishap with a weedeater and I'm trying to get it to look right again.

There's a tradition of upcycling and recycling that I hold to.  If I find something, I will look at it and wonder if I can make it work for me or someone else who is needy.   I've been recycling desktop computers for literally decades now, and there are many of them around here and there.

This kind of craft, well it just amuses me.  I saw it somewhere up North.  Someone had an old construction boot and put some flowers in the thing.  It did duty guarding the front door of someone's porch for a season.  Of course I spotted the thing and decided that one of these days...

Just stuff your old shoe with some potting soil and put a cutting in it.  Water liberally, and treat it as a pot.  After all, it's better than it mouldering in some landfill!

It's not the first time I posted a similar picture.  A while back I posted this same shoe.  What brought it to mind was this week we had the arborists by.  The damage we had to the bougainvillea right behind the house was enough from Hurricane Sandy that we called in the cavalry.  That one will come back, but it lost about 3/4 of its original mass.

Before they started, they had a discussion about that shoe.  Four people standing around pointing and talking about the shoe and the cactus.   When I spotted them, I told them to please be careful about my pineapple plant and that the athlete's foot problem really isn't that severe.  Oh, and I'll move the plant out of harm's way on to the table.

After a laugh it went there and it remains.  I really should find a better spot for that, maybe the porch.  Everyone likes plants on the front porch, even if they are just a cactus in an old shoe.
Posted by Bill at 10:05 AM