Clumsy Moose Plumbing, At Your Service!

When you put one 6'4" Moose of a Man in a small space and expect him to do some home repair, every so often you get one of those I Love Lucy Moments.

Mine was last night.

I have the seemingly annual task of Caulking the Tub at hand.  The caulk is kept under the vanity where it was the last time I did the work.  There's a deep gap between the tub and the wall and it seems to only hold for about a year before the caulk has separated from the wall and cracked.

Last night I finally had the time and materials to begin that task.  All the materials were under the sink, so after gathering the tools, I went into the bathroom.  Pawing at the odds and ends that gravitate to the vanity in any given house, I needed to get down to the floor to reach the three tubes of caulk that were back there in the hidden recesses.

That's where my undoing came.

I had one hand on the vanity and began to bend at the knees into a squat position.  Bad idea.  My one foot slipped on something unseen, and I began to go the rest of the way down onto the floor.

Slamming my back against the wall and knocking some of the breath out of my lungs, my head lightly tapped the boards behind me and I realized that something else happened.

My left hand was still on the vanity that was now another 2 to 3 inches away from the wall. 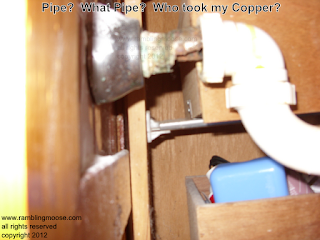 Something most folks don't realize, copper pipes in sinks tend to very slowly erode.  After all, that green coloring on copper is copper oxide - basically rust.   Water plus copper will combine, although it will take a very long time to do it unlike iron.   That copper oxide will wash away and the pipe will slowly degrade.  Add to it some of the chemicals that people tend to use to unblock a sink and you end up with a shattered and paper thin pipe.

We'll be having a new vanity, sink, faucet and a few other things installed on Friday.  It's going to be a busy day.  At least I was able to get the first pass of the tub caulking and fill done using some special methods and materials.
Posted by Bill at 9:50 AM