Jonathan on the Big Bike 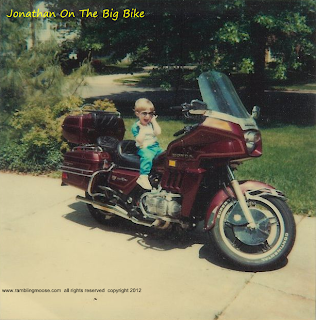 I decided I wanted to do a little more work on my latest little woodworking obsession, building iPhone docks out of bamboo.  Walking out to the shed, I knew I wouldn't find the tools I needed and a later trip to the hardware store would be in order.  Sometimes you do something in the hope that you're going to find what you need or something even better.

It's called Serendipity, and a lot of my life is lived that way.   Keep working on the task until you finish, or if you hit a roadblock, find something else equally productive to do.

I flicked the numbers on the lock to the combination, went in, and poked around on the workbench out back but couldn't find what I needed.  So much for a small circular file, lets poke around.

When I was preparing for the Big Move to Florida, I packed box after box of things I couldn't stand to lose and moved them down to the basement of my house on a hill in the big city.  They all got some sort of cryptic explanation of what was inside when they were parked.  A few of those boxes are left, although this one caught my eye out in the warm shed.  It was helpfully labelled "Bill's Books" and inside there was a cache of pictures.   These were old, probably more than 20 years old and I spotted the picture of my nephew Jon on my old Honda.

When I'd roll up to Mom's House on that big bike, my nephew who was younger than 3 at the time would run and hide.   He was terrified of the thing.  All I had to do was put my hands on the bike and he'd run off scared.

One day I decided that he needed a little help to get past his fear.   I took him aside and told him that I wanted to show him what the bike was.

"Nooo Uncah Beel!  I Scared!"
Smiling to myself I said "Don't worry I won't let it hurt you."

We walked out to the front porch of the house and looked at it a while when I told him it was time, lets go see the bike.

Going across the cement to the resting hulk of metal must have felt like the last mile for the little kid, but he made it.

"Ok, just touch the seat"
His hand reached out as if it were going to be burned and made contact with the vinyl warmed in the New Jersey sun.
"WOW!"

The wonder of a toddler confronting his fears and realizing it was time to move on.

"Uncah Beel, it not scarey, it feel warm!"
"How would you like to sit on it?"
Hesitation until I scooped the kid up and in one motion he was on top of the Goldwing.
Once he was sitting on top his blue eyes got wide and he was smiling.

I reached for the key and said "We're not going anywhere on the bike.  I'm just going to start the motor"

Cranking the key, the 1200CC motor obediently roared to life.
My nephew started to squeal in delight.

Thinking "Yeah, kid the bike does that to me every time too" I grabbed the camera and squeezed off this picture.

This became my favorite picture of my nephew.   I have many others, in fact more pictures of him than I do of my own sister, his mom.  It was a memory to me of a moment when I helped someone much younger and smaller than I gain some knowledge and help him past a hurdle.

He never did get to ride the bike.  I didn't have a small helmet for him and didn't want to take the chance of breaking my nephew.  He meant too much to me to take the chance.  But the picture and the memory survived to this day.
Posted by Bill at 10:00 AM