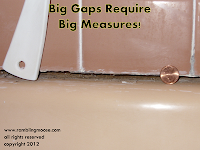 This house has its quirks.  The bathtub settled "funny" and the side of the tub against the outside wall has a very large gap between the tub and the tiles.  I could use a 1/4 round bullnose to cover it up but I am not certain my tiling skills are up to the task.

I've been pumping tube after tube of tub caulk into the gap since we moved in here.  So much in fact that one time I did the caulking, the last bit of caulk never cured solid.

This made me think about ways to finish this off once and for all.   I considered using stucco or another stiff cement, but they crack.  The use of a silicone tub caulk for that gap is best since you're going to get in that tub and it needs to flex with your weight.

No, I'm not calling you fat!

I considered many other materials from Rubber to Putty and all of them had the same problem, they cure either too rigid or will crack when you use a lot of it. 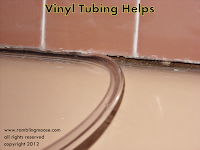 So here's what I came up with, Soft Vinyl Tubing.   The tubing I selected was approximately twice the outer diameter of the gap.  Yes, I winged it.  I guessed and guessed right on the first try.

The idea is that you flatten the tubing and slide it in the gap.  It will expand and allow you caulk over the area without it looking odd.  Just make sure it is fully behind the gap so that you can get a smooth application of caulk that is thin enough not to crack, but thick enough to be resilient when the tub is full. 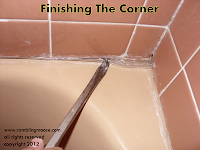 The tubing I used was large enough that it fit firmly in the gap.  Simply use a large screwdriver or putty knife to nudge the tubing into the gap so that it is in place.  Make sure that the tool you use to place the tubing is blunt.  I found that a larger screwdriver was preferable than a smaller one or a putty knife because the vinyl tubing would give way and even allow the screwdriver to break through.

Since these gaps are not going to be even, I was able to slit the tubing so that instead of being round, it looked like a "C".  That made it less rigid and I could slide it into the tight corners easier.  On the other sides of the tub that did not have as large a gap, I used a smaller diameter of tubing that was from a window screen repair kit and even had to slit that to fill the smallest gaps.

It will take some finesse to figure out just how large you should get the tubing, but it eventually worked.  I was able to use about 1/2 of a tube of caulk to give the tub a first coat, and will finish it off with another 1/2 tube.  That's a lot better than the slug of caulk from three or four tubes that I had used the last time through.

Remember, when caulking, clean surfaces as much as possible, and do not use caulk on a wet area.  If you have to use the tub again before it has cured, use some tape to cover the area but do not touch the caulk with the tape until it has dried completely.  Curing time for the caulk I used was 2 hours to "skin over" and 24 hours until solid.