When you move into a home, you often find little things that confuse you.  Why did they do that?  Why did they put that there?  Good GOD why did they ever think Pink was the right shade for that wall?

Luckily I don't have any pink walls here.  I do have a brown bathroom which I have often thought was, well, redundant.  It looks like the 1960s moved in, took root, and then married the 1970s with Knotty Pine on a 45 degree bias, but that's a different story and I do like knotty pine.

We've been told there are quite a few stories that we could be told about the house but they wouldn't dare.  Carrot, meet stick.  Good grief, don't do that.  Either tell the stories or shut your yap.

One of the strange things we've noticed about the property is that the plants are put in some arbitrary places.  Many of those plants were removed over the years.  I spent a good amount of time ripping out "Macho Ferns" from under all the hedges because they would seek the light.  Having a fern grow out of the top of a Japanese Yew because it was planted on the ground and couldn't get the light was a bit confusing to me. 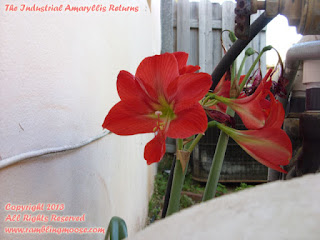 They're gone but I couldn't bear to pull these flowers.   I may move them with the others.  This cluster is behind the irrigation pumps on the side of the house.  The only possible benefit I can see with them there is they won't get run over by the lawn mower.

Our very own private Amaryllis.  You'll only ever see them if you're here at the right time of year, in the back yard, walk around the side of the house, and look behind the pump.

Yeah, I didn't think it made any sense either.  But for now they're safe and sound and eventually, some day...