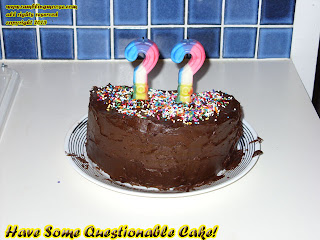 This Cake is Questionable!

This Cake LIES!  It's all LIES I tell ya!

I mean here's this cake.  It doesn't even have the common decency to be a full cake!

What is with those candles?  They are QUESTION MARKS!  I mean, Come ON! Question marks?  What are they supposed to say?  Is it for a birthday?  Is it some secret how old they are?   The candles aren't even NEW!  They were *GASP!* Burned Before!!!!!

Nobody just makes a Half of a Cake!  Sheesh! Two layers and not THREE?

And look at that icing... It's NOT CHOCOLATE!!!!!   It's Commercial Vanilla Icing that's brown to LOOK like Chocolate!  On top?  Rainbow Jimmies?  I bet they are tutti fruiti too just BECAUSE!

I'm so confused *grabs fork*  What's inside?  Orange Icing in the middle?  It doesn't taste like Orange!  It's ... More Vanilla?  At least the cake itself is still Chocolate...

And oh so very fresh and tasty too.

Ok, I'll have the rest of that slice.