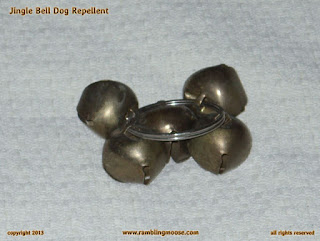 Sitting in the living room of my small house, my concentration is broken.

Listening to the All Armin Trance Channel softly do battle with the dishwasher's purring in the background, I hear a familiar thump.

A tail hits the plastic of the crate walls in the bedroom as Rack stands up.

Getting back to task, I have an email blast and a Facebook posting to do for my Social Media work.

Giving a passing thought to my puppy in the next room, I get started with the graphics work.   The picture has to be resized, then placed on the server, and merged with some text on the eblast and uploaded to Facebook for a later "time delayed" posting about some local business.

My concentration drifts again.  Armin is asking me to "Please go to A State Of Trance Dot Com" when I hear another noise in the bedroom.

It sounds like the holidays.  Jingle bells in specific.

It also sounds like fear.   The dog makes a flying leap off the bed and charges back into the crate.

"Off the bed!" I yell, knowing that he already got off the bed.

This is working for now, but I have a crafty adversary.   The adversary of a lazy dog trying to get comfortable.

For now, the trick of leaving noisy things works.  Rack dislikes noise intensely.  The house is usually a quiet one, the music is rarely too loud since that will get my parrot Oscar giving a screechy accompaniment not out of place in a Bollywood movie.

He must know I'm writing about him, he just laughed once.

There are pillows on the couch.  Two squares, and a Cheeseburger in Paradise.  They serve to Keep The Dog Off Of The Couch.   The bed is a different story.   For now, the bells work.

The dog needs confidence building and training at every step.  He's a shy dog, and that can be worked with.   Walking him near anything that CAN make a noise means that he's going to be giving it the evil eye and trying hard to pull me away from the noisy item.  That does not work well since I weigh about 5 times more than he does, maybe more.

Hmm, better cut back on the snacks...

As we walk, he has definite times of the day that he's better.  The crazy-early 5AM walk that happens when he wakes me up too-early is usually the best.  For him, that is, I could use at least another hour sleep at that time of the day.

The city is asleep, few trucks and buses around to startle him into misbehaving.

Fast forward 12 or so hours later, and the cacophony of city life guarantees his going into fear mode and recoiling at every passing boom car.

I am not convinced he's wrong about that entirely.

But for now, I can work with the fear of noise.  All it takes are a few brass bells on the bed.

That and patience.   We're in it for the long haul.