Why Do I Have A Dead Bosch Water Heater On My Porch? 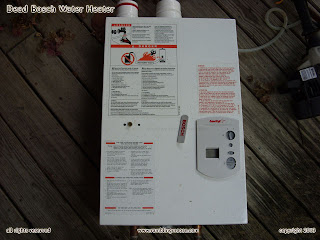 When we moved into this house, we decided that any time we would replace an appliance, we would get the most energy efficient appliance possible.

The refrigerator has LED lights on the front.
The bathroom mirror has dimmable CFL lighting.
The post light in front of the house has a very bright CFL in it.
The washer is low water use and front loading.

And then there's this monstrosity.

Yes, the Bosch AG 250 SX LP water heater.  The bane of my showers.   This was a mistake from Day One.

We never were able to use a low flow shower head with this beast because it required a much too high a flow of water to keep the thing running.  That was always a thorn in my side.  It effected how we would do laundry and dishes as a result since it required a lot of water flowing through the heater element to keep it running according to programming.

At one point we were so frustrated that we contacted Bosch for relief and they sent us a completely new computer for the inside to go from "Rev 4" to "Rev 14" or something like that.   It only made it a little better.  The person at their helpdesk was very helpful but said it was "a problem with this model" and made happy noises.

When the freak storm came through two months ago, it rained down the chimney and flooded the unit.  Rather than being disappointed, I saw it as an opportunity to get rid of this beast and get something that actually WORKED!

We limped through a week of cold showers and other annoyances until the new tankless water heater was installed.

It is a Rinnai.  Much more efficient since the water flow to trigger the heater is somewhere around 4/10 gallon a minute, it will use much less propane.   At 95 percent efficiency, the Rinnai RU98 actually uses a piece of PVC pipe for a chimney.  It also has a very low current draw to the unit so if we were out of power, I could rig up a 12V battery with a car inverter and power it long enough to get work done.

That sort of thing is important for storm prone South Florida.

So frankly I am completely put off of Bosch appliances.  I will not have another once the washer and dryer die.  I will not recommend them to anyone else as a result.  It may be my own personal opinion but it reflects the frustration that we had with that horrendous water heater.

If you have one of these monstrosities, my condolences are offered.   Get a Rinnai.  I can turn the shower down to a near trickle and still get hot water.  They seem to be the water heater of choice in South Florida.