Late one afternoon, I took Rack, my faithful McNab superdog, out to the backyard for his pre-walk visit to the wormhole.

He went about his business.  Doing a perimeter search around the yard is important work for Rack.

We did our dance.  My clapping hands peppering the yard with sounds of joy as Rack rounded the palm tree and over the spa, seemingly hovering in mid-air as he glided over top of it, long way around.

Then he disappeared to the other dimension where he keeps his alternate superdog family in that other galaxy on the other side of the wormhole.

The yard was silent, or as silent as South Florida ever gets.  The FEC doing an evening run on the tracks a mile off in the distance moaning as they approached then passed.

The Neighbor's puttering in their garden getting ready for an oncoming birthday party.  Sawing and paint testing, the air was perfumed with pine bark mulch.

Chattering a yard over with someone discussing The Farm's Papayas and whether they were ready to be served on the table.  Fresh Papaya is a wonderful thing and if it were only one foot closer, some would be on my table as well.  None of that store bought stuff, this grows on a tree on our property line, just beyond the fence.

I settled on inspecting the irrigation lines.  The drip feeds need attention constantly.  Every single day one or another gets clogged as they dribble life giving rusty ground water into waiting roots. 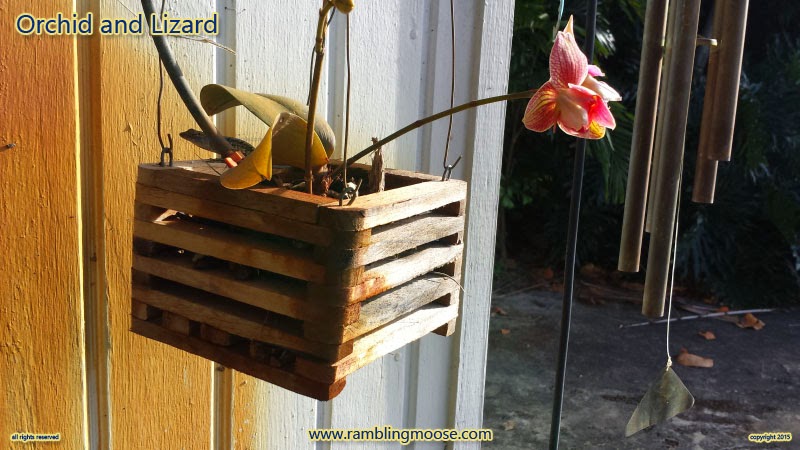 Getting back to the orchid chain, I notice I am being watched.  Rack was still in his alternate universe.  This was a much smaller creature.  Descended from Dinosaurs, I spotted it.  A friendly Lizard.  Hiding in the shade under the leaf of my Phaleonopsis Orchid, I was being judged.  Threat Assessment.

I reached into my pocket, grabbed my camera, and got a picture.

I reset myself, took another picture.

"Annoying little creature, do sit still! I need to finish what I am on to."

It didn't care but I did get what I needed and let it on its own little way.  Rack had come back through the wormhole, sliding into the backyard at warp speed.  Gliding to a stop, feet widely spread out, he lay on the ground as if to say "Play! Now!  Resistance is futile".
Posted by Bill at 9:09 AM