Join me on a journey with my Jeep.

But you will see the job completed.


Ok, enough of this Zen Crap.  If you found this article, you have a Jeep.  Probably a Wrangler, but it could be a Liberty, Patriot, Cherokee, or Grand Cherokee.  I am under the impression that this is common for these cars of the 1996-2002 era, plus or minus a few years, and maybe even to this day.

This is informational only, you're on your own, At Your Own Risk.  I take no responsibility for any mistakes you do or whether you damage yourself or your own vehicle.

However, if you had the right tool in the first place, you could have had it done in about a half hour total.  If you have a Liberty or a Grand Cherokee, I understand the resistor pack is in a similar location but much more accessible since they are a newer design or just larger.

My Wrangler still has some AMC Design Elements in it, and that means it's a simple beast and you can still fix it in your carport while swatting mosquitoes, swearing, and sweating, but it could be somewhat improved.  That was what Chrysler did in later models by moving this part into a more accessible area.

I was able to diagnose this with a little logic.

My Jeep had either no air when I turned the selector to off, or it only had air when it was turned on full.  The middle speeds simply did not work.  This implied that the switch should be intact, and the resistor pack was fried.  I confirmed this with a multimeter inside the house when I had it removed on a cool down break. 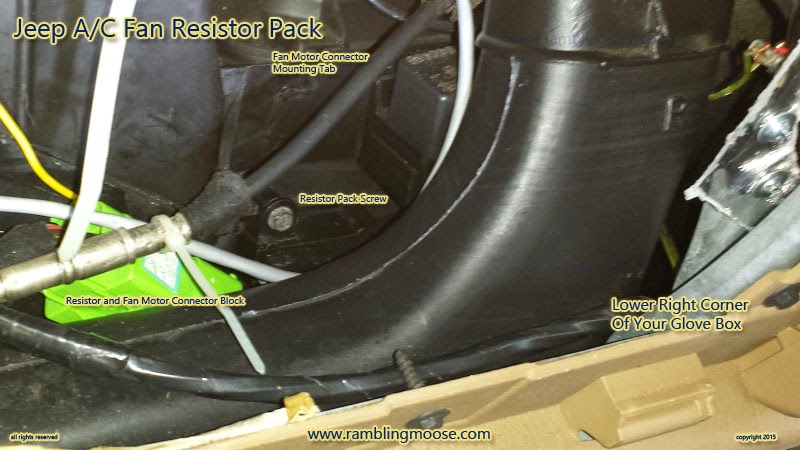 The Resistor Pack is necessary to put a load on the power lines supplying the blower motor that moves all that precious AC and Heat around your car.  What it does when you select speed 1 is to put the highest electrical resistance in line.  Select speeds 2 or 3, and you get less resistance.  Speed 4 is no resistance, and the fan runs at its highest speed.

That was what I saw in my Jeep.  Darth Jeep by name, he's black and tan just like a good beer.  DJ to his friends.  DJ the TJ.

You don't name your Jeep?  How does it know how to get home?

The Resistor pack has a large flat area in the back where the resistance is actually created by a number of lines of resisting wire.  The large flat area is stuffed inside your air flow boxes so that it acts like a heat sink and is kept cool while the fans are on.

In my case, my Jeep has 44,000 miles and 12 years on it.  That means, 6 years of use, and it went pop.  That fits with my memory since I needed replacement a couple years after I moved to Florida in 2006.  I almost never use the car since I generally don't have to go anywhere here other than by foot.

The first picture shows the location of the resistor pack as installed in the dashboard of my Jeep.  It is in a cramped spot, and is held down by two 5/16 inch bolts.  You can see the first one in the picture, the other bolt is at the alternate corner.  If the first one is at the Northwest corner, the second bolt is at the Southeast corner.

Both bolts must be removed, and doing so is a task that I completed with a 5/16 inch crescent wrench.  Since a wrench that small is typically not bent to have the circular end at an angle, and they are made of thin metal, I used a leatherman's tool to bend a 30 degree angle in the wrench in order to be able to get the bolts out.  Once I did that, the bolts came out much easier.  There are tabs that are simply in the way of your being able to do this job. 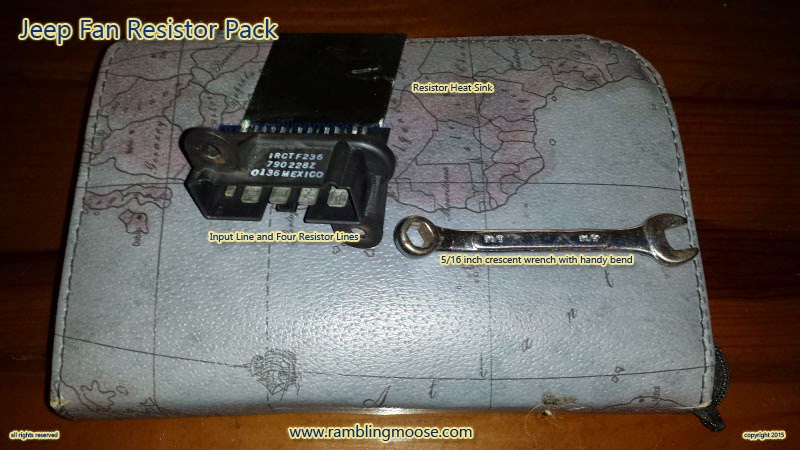 You will be removing that lower bolt blind unless you are small enough to wrench yourself under the dashboard.  Since I am 6'4" tall there was simply no way I was going to get into that spot upside down and looking up at the part.

You will also need to temporarily remove the green Connector Block from its tab on the air box/plenum/dashboard.  There is a little red tab that snaps to lock the whole thing in place.  Unlock the red tab by snapping it forward, then slide the connector block out of your way.

I disconnected the connector block, then pulled the resistor pack out.  It wasn't easy, it required a lot of maneuvering around to get it out of the little hole.  I was able to do so by removing the connector from the back of the block.  That itself was difficult since there was a red plastic lock holding it all together.  I removed that lock by pulling it apart and removing it permanently.  It may cause problems later, but at least I know where it is!

The detail shows the block in close up as assembled. 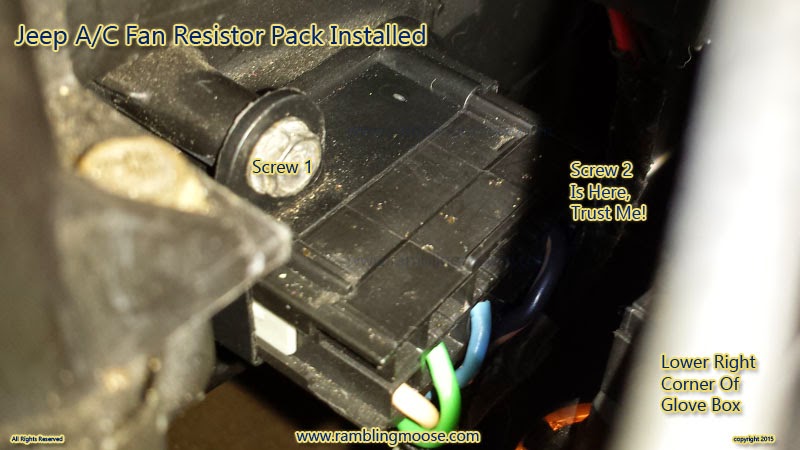 To get the part?  You can find it at your local auto parts store.  I got mine at Autozone for 1/2 the price of the dealer.  You can also find it on Amazon.  I wanted it TODAY, not in 3 days.

To see someone else do the work?  Search Youtube.  There are videos and none of them showed the detail that I am showing here - where the blasted thing actually is.

Before you even try, remove the glove box, get your flashlight and look to see if you can find it.  If you can find it, it's an easy fix even if you're going to get your knuckles scraped or maybe mosquito bit.

After all it's March and its in the 80s, and mosquitoes are everywhere.