The Broken Poang Story or You Want To Drive Across The County For A Bolt?

The story started once upon a time in the dark ages called the 1980s.  I have a friend from way back then who got a job with Ikea when they opened their very first store here in the US in the fabled land of Plymouth Meeting, PA.

He was a fan of some of their products and since I had a major car accident where I was "laid up" for an entire summer, it was years before my muscle mass was strong enough that I could get comfortable in a chair, I would need to look for some furniture.

My friend suggested trying out a Poang Chair. 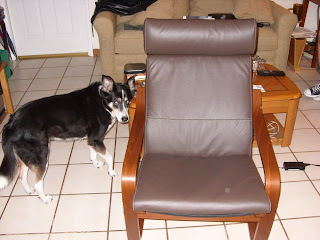 He described this weird flat pack thing that you get to assemble.  You select the upholstery you want with it, put it all together, it looks stylish and has clean lines.  The one I am sitting in now has a leather cushion and fits in quite well. I did eventually get one, but it was quite a few years before I did.

I went to a store and saw it and did like it but somehow managed to avoid getting one through the Apartment Stage of Life into my first home.

Then, I moved to Florida.  Then being in 2006.  One of the first things I managed to get was a Poang.

You see, Poang Chair frames are so sturdy that people tend to give them away rather than throw them out, or they end up at a better thrift store.  That is how I got both of mine.

I did go back to Ikea and upgrade the padding and upholstery on the first one - they are designed to be replaced by simply pulling them off the velcro on the frame.

It was a strange synthetic blue that looked like it belonged in a frat house basement.  When I put on the smooth and supple chocolate colored leather covering, it dressed it right up as well as the matching ottoman.

Yes, I do like them.  The second one serves as a desk chair.  Although my back is 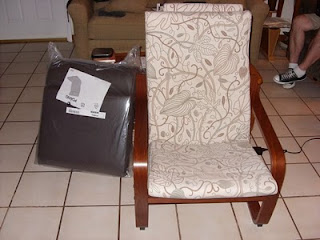 much much better now, I can't just sit in any old chair all day long.  The Poang is the exception.

The other chair has the original cotton fabric covered foam upholstery.  I'm fine with that.  Some of the upholsteries can be machine washed depending on the care instructions on the tag so you might be able to toss the covering into the washer, cold, and it comes out clean.

Some are dry clean only, and leather needs its own cleaning regimen.  Your mileage may vary.  Consult your owner's manual.

Just let it air dry.  If it shrinks because you used Hot, you're stuffed.  The original Frat House Blue covering shrank, I haven't been bold enough to try to wash that beige one since it goes well with the colors in this house.

The other day though, I found out what the weak point was on the chair.   I was watching some drama on TV when all the sudden I was on the floor.

You see, there's this bolt on the shoulder of the chair.  It holds the part you sit in to the frame of the chair.  Since everything is built very efficiently, remove one part and it just becomes a pile of bent wood.  They are built to bounce slightly while you are moving around in them but I guess 10 years of bouncing took their toll.

In my case, it was a pile of bent wood, reclining at a strange angle, me on top of it all and grateful that the dog did not get crushed under it.

I had to wait for my friend to calm down after I got rapid fire questions about how it happened, what caused it, why did I do it, and other minutia.

Obviously I didn't break my favorite chair on purpose.

"Well I'll have to make a trip to the hardware store.  They keep parts for these things.  Barring that, it's back to the Ikea Mothership and get a bolt."

I was told not to do anything, he'll drive me to Ikea, we'll get the bolt.

"All the way across the county to get a bolt?  I know Ikea stands behind their products but we don't even know if ..."

I was cut off.  It's a treat to go to that giant blue barn of strangely named the merchandise.  "We can get a Right Sized Dinner there and get your bolt."

*sigh* OK, I'll give you a couple days and we can go otherwise I will start looking in the big box hardware stores.

Only my pride was harmed in the collapsing of my chair.  I waited a few days and we went out there.  Sitting shotgun in the car listening to that mechanical woman's voice on the car's GPS try and fail to figure out a good route to the store and tell us for the first half hour to "Make a legal U Turn" over and again.

"Come on, you silly voice.  It's West out Oakland Park, South to 136th st after the curve!  Keep going until you see it just shy of I595.  It's South Florida!  Locals Don't Take Interstates at Rush Hour!"

We got there, got a Right Sized dinner, explored the items that were named at random by tearing pages out of the Stockholm Phone Book.  There were a few things I would not mind getting, and the Poang Rocker caught my eye yet again but the house really is Full of Things and I don't need to shop.

Getting to the end of the maze I walked over, took a number and waited for one of the ladies at the counter to call "165!".

"Hello, I need a Bolt!  My Poang collapsed and I was dumped on the floor!"
I got a bemused look and the tiniest hint of a smile.

"Ten years to a bolt, good gas mileage."  She looked at a parts explosion for the chair.  They actually do stock all the parts to make their products in case you lose one or are shorted one.

Or in my case, ten years of use, the chair decides to shear one.  I'm a big guy, but not outlandishly so.  I understand that the load capacity is well north of my own 6'4" and 225 Pounds.  They used to have a display where they were pounding a Poang chair with hydraulic lifts to illustrate their strength.

Good to know that I am not too big to use a chair!

She came back holding two of the bolts plus my sheared bolt.  Part number 146654, and no thank you I don't need the special Ikea Allen Wrench part number 100001.

"Thank you! I can fix my favorite chair with that bolt!"  as I took both.

You never know when you need a spare bolt!  Maybe some time in another ten years I will be going back out to Sunrise, FL, to get another Right Sized Meal and some other parts after replacing the other bolt.

Just don't know.  But it's better than ending up on the floor with a surprised look on your face and a broken bolt to extract.

Now... if I could find a piece of plywood here around the house.  About 18 inches by 20 inches.  I could firm the seat up a bit.  Ikea products are very hackable.  End tables for $10 that work as computer racks are well known, and someone once built a man cave under a platform bed constructed from bookcases.