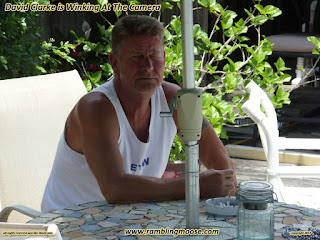 I told myself I wouldn't write this.  I had already said my goodbyes in a few ways, made my comments, and as is normal these days I made some comments on your facebook feed.

Then I saw this picture of you on a pass through my picture collection.

It must have been what was in the back of my mind when I wrote on facebook that day.  It's exactly what you'd do.

You'd park yourself in the backyard under my umbrella.  Next to the pool, you would go out there "Not To Smoke" but you would anyway.  You were the only person allowed to smoke on the property but never in the house.

Bringing your cup of tea out there, it became Your Spot.  You could look across the pool at the tropical plantings secure in the knowledge that they were tended to by someone else.  You were taking a break from your duties.  I guess we could call you a Concierge because you were always doing something for someone in some weirdly random way.  I was always surprised to find out some of the things you would do.

My backyard was your refuge from all of those duties.  You came here, occasionally but not frequently enough, to get away from all that happy nonsense of the life you chose during the week we met.

I have known you since, as best as I can tell, February 1987.  We met when I vacationed there and you had just landed from London.  It was a vacation from that life, but you would make it permanent.  A lucky break or three gave you just enough to be able to set roots down and you could live there.  Maybe I have the timing off one way or another but that is my best guess.

We kept in contact excluding a gap in time.  One chance meeting I was walking into the market some time around February 1992 and there you were coming out.

You visited us in Philadelphia.  You enjoyed my own neighborhood of Chestnut Hill as much as we did.  I was told it looked just like the English countryside town that you came from.  It was "Very English".  When you were there, I didn't tell you that the shop owners took you to heart.  When you left they would occasionally ask when you were coming back.

Later we moved to Wilton Manors, Florida.  It's a full 190 miles away and a long four hour drive from you in Key West.  I was warned that it was one way in and one out and traffic could completely block.  People could have a 10 hour trip through the keys because "The Sysco Truck broke down" or overturned or some dumb tourist cut in front of it.  All were plausible.  None happened when I went down there.

Just watch your speed driving the Keys.  They will ticket in some places at one MPH over.

My visits were a mirror of yours.  Take over a room, drop the suit cases, and relax before a long wander through town to see how much things changed.  Key West changed completely over the years.  Wilton Manors less so.

Every visit I would spend fixing your computers.  I was happy when you got a Mac because then you wouldn't get those Windows viruses.  Then the virus writers targeted Mac and you would get them there.  I remember you had a literal stack of machines and every one would end up used up and set under the bed in the spare room waiting for care because Virus.

Well now there are no more links to click.
No more Mangos to duck from the trees.
No more check ins.
Someone else will feed the cat that visits you on your porch for food and sometimes come in for a short visit.

I didn't find out until after I called you and left a message, worried.

Four minutes later someone on your facebook feed confirmed it.

The stories went back and forth.  You never completely hide from friends.  Now it is much easier for friends to talk.  We shared details of how you were planning to come here but kept missing the trip because you were feeling badly, twice in the week before.  Each time this happened I'd implore you to visit the doctor.  You would become more strident about my coming to visit.  I think we know why now.

I had a wonderful chat with your friends, even in your home town.

You were so very proud of that town, Winsford, England.  When I showed you how to virtually walk down the street there you were "gobsmacked".  So was I.  I would love to see it myself but probably never will get there, just like  at this point I doubt I'll get back to Key West.

I captured that picture of the big stone church and put it on your computers every time I set one up for you.

In fact there were three computers here for you to look at.  All with the picture of that church in Winsford, England.

We would go through those pictures and virtually visit your town with the old show To The Manor Born on the TV.  We watched that series so many times that we could quote dialog along with Audrey and the Rest.  All those old comedy shows that you'd bring along, some I had seen, some not, and always a very enjoyable time.

You are and now were more than a friend, you were a big brother from another mother.  You will be missed.