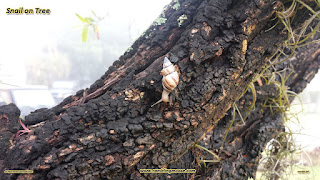 In the yard, there is a little garden.

The little garden is an island afloat on a sea of grassy green.

In the middle of that island is an old snag of a tree.

I can't bring myself to cut it down.  It's old, it's moth-eaten, and it's partly dead.  But the parts of that old snag are quite thoroughly alive.

The old snag is a bottle brush tree.  It puts out red flowers that look like a bottle brush from time to time.  So I cut the dead spots off and leave the thing be.  I'm overdue for cutting more dead spots off that tree.  Because of those dead branches, I also have lots of air plants, Tillandsia, growing on the bark.

It is its own little ecosystem.

Spanish Moss, ants, birds.  It's full of life even if the tree can't decide what to do.

After a rain, much of that life is forced to the surface.  You can go out there and watch the lizards crawl over it and poach a few insects.  That is their place in life, to keep the pests down.

They don't seem to mind being watched anyway.

But on the bark this one day was a snail.  They usually are seen stuck to a window or a post or some other vertical object.  When they are there, normally, they are not alive.  In fact it is rare that I see one out in the open like this particular day.

A little piece of Escargot trailing a shell that looks like a fancy chocolate, right there in the open, on my half alive tree.

Sure, I could cut it all down but what is the point.  I already have a palm tree next to it.  I did not plant that palm.  It 'involuntarily' grew in my pot in the back yard, and took it over.  Most likely thanks to some errant bird that left the seed when it was getting ready to fly from my Sea Grape tree in the back yard.  I did not weed the palm until I realized it was too late so I cut the pot away from the plant and dragged the root ball to the front yard where I figured I would need it.

The blasted palm tree is now more than 15 feet tall.

So it's all a nice little family.  Half dead bottle brush tree.  Out sized palm tree.  Some red screw palms and another clump of green ones on the other side.

And the chocolate shelled snail lives there happily as well.

We will just call it a garden, uplight the palm, and call it done.  May as well.  You get some interesting visitors from time to time, you know.
Posted by Bill at 11:30 AM