With An Intelligent Dog, You Get Opinions 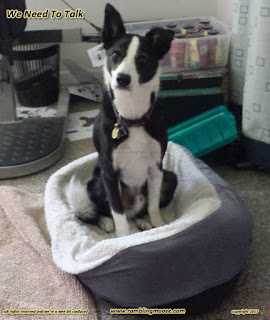 I have read that dogs don't disobey.  They interpret.

You just may not understand how they are interpreting things.

Of course all of that interpretation will change based on where that dog finds himself in a pack.

A dog who is confident will decide that it wants to go for a walk, so it decides it will do so.  Whether it is on its leash or not.

Of course they tend to only do such a thing if they are not getting exercised enough or are deadly bored.

Don't want your dog to wander off?   Walk him.  Long walks.  Three miles for a dog in a day really isn't a lot unless you have one of those fussy little things that bark at a leaf moving in the next county or an airplane over head.

That's your burden.  It still needs a walk.

Beta dogs are a puzzle.  They require careful handling.  After all, they are looking to you for guidance.

Rack is a Beta.  He's also incredibly intelligent just like any other McNab Dog.  Intelligent breeds are that way.  Anything-Shepard.  Herding Dogs are used for their intelligence because they think.  In a house, they can get bored.   A Beta who is Bored is going to still find things to do and interpret what he thinks the rules are. 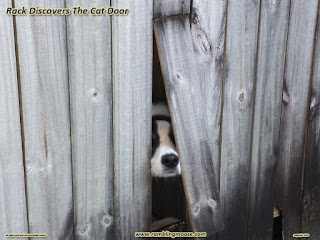 Luckily Rack isn't bored often.  He's happy to lay down and sleep next to me for most of the day.  My chair that I do most of what ever it is that I actually do is near a window.  I see things that happen, after all it is a busy street.

The other day I saw something go on.  Rack was asleep.  But being a herding dog, it was almost like there was someone whispering in his ear what is going on.

Then I spotted that something.  Could have been anything from the feral ducks to a neighbor getting landscaping to a passer by.

I made the mistake of saying "Oh.".  Not particularly loudly mind you.  Just a slightly louder than a whisper "Oh."

Standing up, he ran to the front door.  Fur up on his back.  I guess he didn't like what was going on.

"Damnit Dog, go take a look, there's nothing out there!"

The grumbling went on for a bit, then he lay down and go back to sleep. 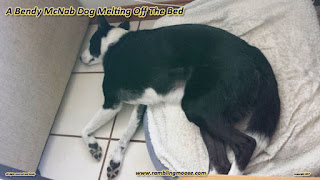 I go back to entertaining myself answering emails.  Reading tech websites.  I realize that I have a website that needs attention.  He's fast asleep and jogging in his sleep.  Alternating between running and wagging his tail.

My standard thing is to keep him busy when he's interpreting what I am going on about.  I won't tell him to look if there's a delivery in the area.  That would set him off again.

I get the same cycle of winding down and walking back to his place where he can continue watching me, getting things wrong, sliding into sleep, and wagging his tail. 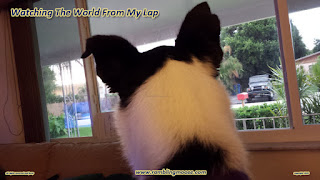 When he's not doing dippy things, he's actually very quiet in the house.  But twice a day...

You see, the UPS truck comes through the neighborhood every afternoon and that would set him off.

That's what you get with an intelligent dog.  A Police Officer who worked with dogs once told me "On their best day, they're still a dog".  I can see that.  They just don't always get it right.

But, I can easily tell him to walk around in the front yard to dry off his feet after I wash them at the end of a walk.  Even if his best dog friend the giant Rottweiler named "D.O.G." is out there.

Yes, D.O.G., and no I don't know what Double-Oh styled agency that he's a part of or what it is short for.  It's just 165 pounds of mostly black love sponge who whines at me from across the street.  And yes, he interprets as well since that whine is him saying come on over I am lonely.

Weirdly, Rack is now comfortable enough with that that he hasn't taken the Once Around The Car "Walk in the Grass" order as being conditional and up for interpretation, but who knows.

After all, on his best day, he's still a dog.