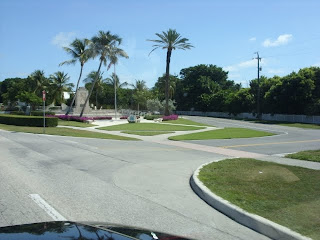 When driving up US1 from Key West, after about 80 miles or so (I'm doing this from memory so don't hold me to it), you hit the middle to upper keys.   The land and road changes from being East to West to bending toward the Florida Mainland to the North.

In 1935, on Labor Day, an extremely strong hurricane hit this spot.   What it did was inundate the land and wash everything that was not strong enough to manage the storm surge out to sea.

That hurricane is why US1 goes to Key West and doesn't stop further North in Dade County.   What happened was that the Railroad that was built from Miami to Key West, Flagler's Folly, the Florida East Coast Extension was basically erased.   The storm surge washed out the tracks in the Middle Keys, but left the bridges intact since they were built to last through some rather durable concrete.   To this day you can find remnants of the tracks and a Caboose or two here and there from Islamorada on South, and the bridges were left in place.

The entire railroad right of way was sold to the state of Florida for a dollar, and the road was paved over the tops of those bridges.   In places you can tell that the road was built on a right of way since it is slightly elevated, and absolutely flat.   Others, you get on the more modern replacement bridges and can look down on the old Flagler FEC bridges and see the road bed.  They're used for Fishing platforms for the most part and are quite popular.

This monument stands for all those who lost their lives on those days in 1935 in that horrific storm.   It ruined a railroad but made the lower keys what they are today, Accessable... after a LOT of work.
Posted by Bill at 8:00 AM