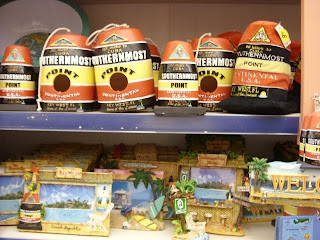 Every city that has anything interesting has one monument somewhere that someone has decided is worthy of making out of Lead, Resin, Tin, Plastic or some other material and selling for ten dollars or less.

In Philadelphia, it could be the LOVE statue, Independence Hall, or a number of other sites.  New York has the Statue of Liberty (Really in New Jersey), the Skyline, Empire State or some other long list of buildings.   Indianapolis has the monument in the circle downtown.

Key West has the monument you see on the top shelf here.   Its a Concrete plug that is at the traditional southernmost point of the continental United States.  They painted it as you see here, and people go to see it, touch it and look toward Cuba only 90 miles away.

If you look at Google Earth much, and I do, you'll notice that it isn't quite the southernmost point on the island, let alone in the Continental US.   There are a few other small islands just south of Key West but since they're not inhabited, the Conchs tend to ignore them.   I won't tell.... or will I?
Posted by Bill at 8:00 AM