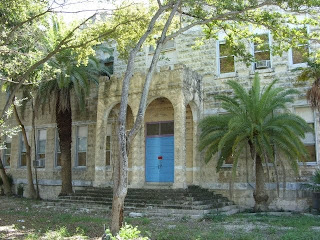 When I got to Key West, I was ready for the slightly scruffy look that I'd see just about everywhere in the lower keys.   It is incredibly expensive to live there, pay is low, and unless you work in one of a handful of jobs you're waiting tables or in hospitality.

The place has some incredibly beautiful properties, but they're usually owned by someone with a lot of money.   The locals, Conchs, tend to be a bit more modest.

When I was out walking that one day, I was expecting a bit of that scruffy look but this was something of a shock to me.   This was one of the old schools in Key West.   I used to work for the School District in Philadelphia, and while they had some buildings that were old, they weren't typically abandoned - money was too tight.   Here was this building that I have to assume was a high school at one point just walked away from.   It reminded me of a place in one of those post apocalyptic movies that you'd have people huddled against zombies with wires draped from the ceilings - all on a multiple acre lot that could be sold for literally millions.
Posted by Bill at 8:00 AM