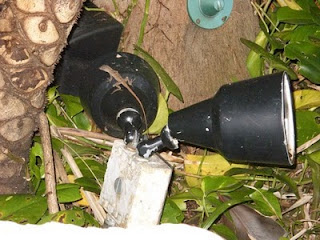 This little guy watched me have dinner at Mai Kai in Ft Lauderdale.

Now, none of the above are really all that noteworthy except in view of the recent weather we had down here.  We had a cold snap here in January that was about as cold as it gets.   It didn't go below freezing here, but it was only a degree or so above it.  When you're in the semi-tropics, that's a big deal.

Since January I have seen absolutely zero Iguanas.  That's a good thing since I had been fighting them all last year and had a 12 foot tall bougainvillea stripped of leaves, flowers and even spines by those beasts.

There have been much fewer flocks of Parrots here as well.   The Parrots disappearing are not really a good thing in my eyes.  Yes, they eat the fruit of the palms and drop their leavings everywhere they go, but they don't normally destroy property.  There simply are not enough Parrots around to be that much of a problem.   I would expect to hear them when I was outside, but now it is down to once a week or every other week.

The Geckos and Anoles have been decimated but are rebounding.  I've seen much fewer of the little guys sticking to the walls, and that's notable since they're natives.   The Curly Tail lizards that were moving in from West Palm and Palm Beach County just after Summer have completely disappeared.  Curly Tails were beginning to displace the native Geckos and were rather aggressive since at twice their size, they could be the bully and send them on their way.

With the normal balance somewhat restored, more of the natives are showing their heads.   I'd bet that there are fewer pythons and boa constrictors out in the Glades as a result.   Better to be this way than being overrun by things that simply don't belong!
Posted by Bill at 8:00 AM