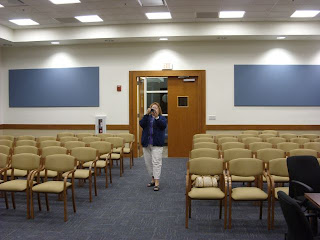 Welcome to the New Commission Chambers at City Hall in Wilton Manors, Florida.

This was the view from my seat on the Dais at City Hall when I was at the first ever CAAB meeting.  Since then we've had a couple of other meetings in that hall such as Commission and the other normal City business.

Since this was the very first meeting ever in the new chambers, we needed photos for the Historical society.   I had my camera there and had the chance to photograph the photographer.

The old chambers had a semi-circular dais that was much more conducive to conversations and as a result more intimate.   The new chambers dais is almost linear, as the room is much larger than the old "Two Fire Truck Bay" that was converted and served for 30 or so years.   Other than that, no complaints, it is a beautiful room, and does the City well by its presence.  It is well equipped with all the new technology that you would expect in a modern meeting space.
Posted by Bill at 8:00 AM