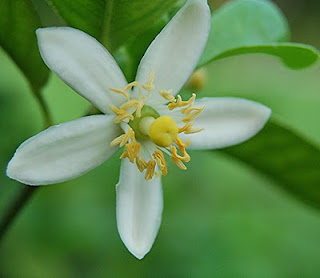 This is what they look like close up.  I found this particular picture on the web, and I liked it.  It is in rotation on the desktop on my Windows 7 machine at work, not that I can see what is going on the desktop.

There's a certain time of year, I think it has to be in peak Snowbird Season, February or perhaps March, when these flowers are open.  Not just on my tree next to the carport, but all over Florida.   It is hard to describe the beautiful fragrance that you get when you're driving on any of the roads in Orange Country, generally North of Palm Beach County, South of Orlando, The Indian River Area.   When you drive in South Jersey or North Carolina, there's a pervasive smell of Pine in the air.  In season, you get a fragrance here of Orange, Lemon, Grapefruit and other citrus.   It is simply amazing.

I have a few Oranges left on my tree still.  I got home Friday Night after driving with the roof off the car, pulled into the car port, and saw them on the tree and picked one.  It was still a little green and tasted a little more sour than it should have, but it was something you just don't get to do too often.  There were only about 12 of them on the tree this year, better than the three from last year, but I like having the plant and the luxury of picking one, walking to the sink, biting the top and having Orange Oil make my lips pucker and the scent rush through my nostrils.  It is a caress from Nature.

As for why I eat a Honeybell over the sink?   As it was, I had to have a bowl under the orange as I ate it, there was so very much juice running down my arm.   I actually considered once eating the thing in the shower.
Posted by Bill at 8:00 AM