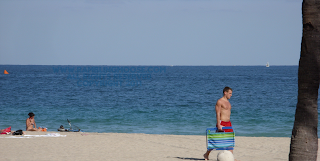 When you have had enough sun and surf, it's time to go home.

I remember when I was talking to people who lived down here about how I used to enjoy body surfing at the Jersey Shore.  Dad would pile us all into the Buick and drive down to Atlantic City, NJ or Brigantine, NJ and splash the day away.

I had pictures of us with buckets of clams from Brigantine, not really knowing what to do with them when we got them back to our house.  Note to all parents, if you're going to let your kid dig up clams at the Jersey Shore, have them put them back.  If not, then at least have a clam bake.  They won't survive in fresh water.

Pat and I would try to catch just the right wave and see how far in we could go before our belly would scrape the sugar sand.  Quite a few times we'd make it in to below knee level, other times one or the other of use would end up rolling into some guy's legs like a giant piece of flotsam.  Amazing what kind of damage a 10 year old kid can do when the waves push them into you!

The beach at Fort Lauderdale has none of that.  I could have gone there and built a sand castle like I did all those childhood years, but the waves are not very common here.  If there's a storm out to see, surf's up, dude.  But normally it's a mill pond like you see in this picture.

Those sand castles I'd build, by the way, were not terribly complex.  It was the moat that was the big deal.  Dig down about 5 inches and you would end up with water seepage.  If there's water it has to go somewhere, so I'd end up spending more time digging drainage canals than on the original castle.  By the time I grew out of digging castles in the sand, it ended up being a hole and just a lot of ditches to drain the stuff off.

The biggest draw back to that was your back.  After about an hour standing bent over, face down digging channels for water, you would realize that your back was as red as that guy's bathing suit in the picture.  A good reason to stop building the things I'd say...

If you're at the beach today, you're sandblasted, but at least the breezes are coming off the ocean like they should.
Posted by Bill at 10:28 AM