My Border Collie has a Sense of Humor

I've heard people say that sort of thing before but I hadn't noticed it first hand until recently. 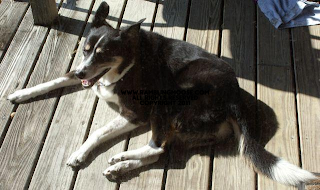 Dogs smile.   Furthermore, Dogs do it because they know what a smile means to us.  It is not a natural gesture in Wolf Society.  They have a completely different body language.   Over the last 13,000 or so years, as dogs and humans co-evolved, dogs evolved a need to please us.  They are eager to do things because of what they have become.  Wolves are just wild animals.  While wolves and dogs can interbreed, they are no longer the same species genetically.

Or so I have been told.

Down the block there is a house.   It is actually a duplex and it sits next to the Women's Club in town here.  I believe that the people that live there are renters, but I have no real idea of how that particular cluster of homes are connected.

One of the parts of the Duplex is inhabited by a man and a woman.  They also have a pack of dogs there.  There are at least three rottweilers in that half of the house and there are more that are in there.   I know this because when ever anyone walks by with their dogs, you are greeted by a chorus of yapping and barking.

Basically I know by this that the dogs are not cared for appropriately because the reaction is way out of proportion for what the dogs are seeing.   These dogs are charging the door and the window and basically tearing up the place.

The owner of those dogs isn't much better.  He's a rude individual, has had shouting matches with multiple people with dogs including myself.  The other day I watched him let his rottweiler defecate on another person's property and did not clean up after it.   After he started to move on, he tried to discipline the dog for some unseen infraction by kicking it in an imitation of Cesar Millan's "Touch".  The "Touch" was more like a Punt because that dog recoiled in pain, tail between it's leg.

I have to question whether this individual should have dogs at all.  He obviously treats them like he treats the neighbors and the rest of passers by.  That is to say rudely at best.

The next day as I walked past with Lettie, my border collie, we went through the gauntlet of at least four dogs barking at windows and general disarray.   She stopped in full view of the window and decided to make water.

She was taking WAY too much time so I said to her "Come On Girl, lets get out of here, they're crazy!".

It was at this moment I noticed her smiling.

As she took her own sweet time to finish emptying her bladder for now and probably the next five walks we will have, I was finally beginning to realize what she was doing.

Border Collies are extremely intelligent dogs.   If they know that something is wrong they will do what they think is right to make it better.   You may not realize it or you may not agree with it but they know what they're doing.

We walked away from the property and I said to my companion, "You know, I think she did that on purpose!".  "Look, she's still smiling!".

Dogs in the background barking their fool heads off, Lettie looked over at me and smiled even broader.

She had made her point!  She stopped there to annoy that overfull house of dogs!

Now I am realizing that at that point of the walk, she simply doesn't have anything left in her to empty out.   She ALWAYS without fail stops in front of that house and will pull me to that house's side of the street in order to relieve herself.

She does it to annoy those dogs.  It is a conscious act.

She also has let me know that she knows what she's doing.

So the next time you hear some person talk about a dumb animal, tell them this story.
Posted by Bill at 8:00 AM