The other day Father John needed a camera to take some video for his church.   We went out and bought a camera, not really all that high end, but suited to the task.  Along with it was bought a 16GB memory chip that it turned out that the camera truly hated.

I put it in the camera and pressed record and between 22 and 33 seconds later it would simply lock up with a message that the chip was too slow.  Strange.

My own chip worked. So we realized camera good, chip bad, and returned it. 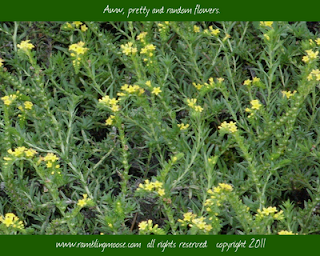 Before it went back I took the memory chip with me for a walk around town and took random pictures.  Anyone with any experience taking pictures will come up with a good one from time to time.  In this case, the picture was nothing more than some small, low growing, native plants in the local M.E. De Palma Park near the house.  I was pretending to be Mr Tourist and taking pictures of all sorts of pictures with no real rhyme or reason so I could "exercise" the chip.

It went back, Father John has a new chip that the camera likes, and we will be taking some movies for the web site.

I still have the test shots, and this is one of them.  After cropping out weeds, it's remarkably even in its randomness.
Posted by Bill at 11:16 AM