A Weekend of Cooking 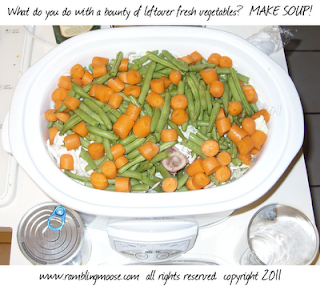 This weekend was all about the kitchen.

I enjoy cooking, I enjoy baking.   That's obvious from the blog and if you have ever spoken to me.  I didn't realize just how much time I spent in the preparation of food this weekend.

Saturday I wanted a burger.  But to have a burger, I had to have something to go with it.  That meant a trip to the Green Market and Whole Foods.  We were going to make a Beef and Vegetable soup on Sunday so that meant while there, Kevin picked up some ground beef.   While he was gone, I cleaned the grill, got the rolls set aside, and found my way into the kitchen.  As he rolled into the front door, there were more fresh rolls to go into the freezer.  Ok, so take the pound of ground beef and make four measured 1/4 pound burgers out of the 90% beef.  Warm the grill up to make sure all the grease was burned off, toss the burgers on the grill and babysit the thing.  The burgers we made were well done by the book at 160F while the beans finished in the oven.

Sunday morning early, the base for the beef and vegetable soup was being made.  I started to panic as the refrigerator was crammed solid with food and the freezer now had the leftover burgers that were cooked for later meals.  Luckily the burgers froze well and stack like cordwood inside little nooks and crannies because we will need the space.

While the base was being cooked, it allowed Mrs Dog to be bathed whether she wanted to or not.  Cantankerous old dog fearfully snapped and drew blood on Kevin's hand, while I was out back taking pictures.

No, I really don't like to give her a bath.  Those teeth are still sharp.

More burgers got onto the grill for lunch, and a side dish of Baked Beans Which Are Really Better On The Second Day ended up in the microwave... pulling six perfect Medium pink burgers off the grill, there's five more discs of Cow in the freezer.

Oh Steer you did not die in vain!

After lunch back into the kitchen first slicing down a potato into chunks, then an onion, then half a bag of carrots and a couple celery stalks.  All of that got staged to go into the pot with the beef stock when the bone came out.

Soup bones?  Yes they do sell them still, you have to ask.  The meat tastes amazing when it is cooked with all that stuff, add some thyme and other spices and boil it to the right consistency.

The result was a giant stock pot of five and a half quarts worth of amazing beef vegetable soup that fed Kevin, Me, the family across the street both Sunday and Today.

So how did that fall into Monday?

In his rush we ended up with a basketball in the refrigerator that only got half used.

What do you do with the stuff?

No, I won't eat that much Cole Slaw, I don't like the stuff THAT much.  There's a reason why they serve it in little sample cups!

We had the presence of mind to slice that whole head of cabbage down into shreds.  The result was a giant mound of pale green stuff with only a little taste.  It went into the crock pot to cover a ham bone that had been in the freezer since the last time I bought a ham on special, bone in.  Honey cured ham.  Yum.  Makes great sandwiches and it's cheap.

So sitting in the crock pot is a ham bone, giant mountain of cabbage, a bag of green beans, a bag of carrots, and about a quart of water.   All of this was sliced and assembled in 15 minutes while making breakfast on Monday morning.

Three hours later it has just begun to relax, the lid of the crock pot had settled down onto the mass of green and finally closed.

I added a can of Pineapple chunks and the juice to the mess to help break it all down...

There's still an onion and a potato that should go in there but it may not make it.  The pot's overflowing.

The bounty of vegetables is all over the place, on the microwave, in the freezer and refrigerator, two giant tan tubers of potato blocking the microwave, two flat Vidalia Onions leaning against the coffee pot.

If this mess turns out, it's going to be interesting.   After all, it was nothing more than vegetables that were going to go to waste due to overbuying and a leftover ham bone that I couldn't bear to toss out.

The best recipes sometimes are nothing more than a happy accident.  Random amounts of food that were cooked together with crossed fingers.  It's either that or they end up in the trash bin and that would be a shame.

Hopefully this giant mess of food, around 10 quarts of soup, will get into the freezer.  If it gets there, hope for gentle weather.  It would be a shame if a power cut hit due to a tropical storm.

At least frozen bricks of soup help to keep the freezer cold.
Posted by Bill at 10:39 AM