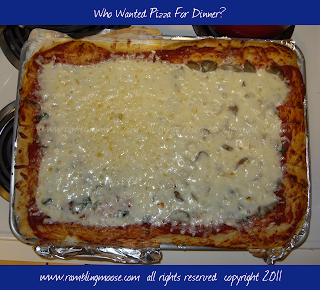 You guessed it, I made another pizza this weekend.  Sure, I could walk to the shops and get a good pizza from the local place, but I've been told mine are better.

Much lower salt, and fat, and the ingredients are absolutely fresh.  In fact, the only thing I don't know how to make from scratch at this point is the cheese.

No, I'm not that "hard core", I'll buy my own Mozzarella, Feta, and Asiago and call it done.  I do know how to make my own yogurt and can make cheese from that but really that's over the top.

Anyway, I went looking for a recipe for Pizza Sauce.  I wanted the simplest sauce I could find.  This one was billed as "No Bake" but really you want to show it some heat.   Simmer over a low heat for an hour and it will be much better!

Here's how I did it.  If you follow these instructions, even someone who is terrified of cooking can make a proper pizza sauce that will turn out "shockingly good".   About 5 minutes prep.  I took about an hour total to cook it.

I first combined all ingredients in a bowl and realized that it was way too wet to make a proper pizza.  The recipe called for too much water.  A pizza like in the picture is on a large cookie sheet and uses one can of commercially prepared sauce.  Those cans are 12 or 16 ounces.  I've seen both sizes.  The recipe gives about twice that in liquid.  My recommendation is to mix all the ingredients in a large measuring cup and add the water to bring the contents to no more than 16 ounces.   The texture of a pizza sauce should be thicker than any spaghetti sauce that you have ever used or made.

Pour all the ingredients into a blender and let it run for a while.  The garlic should be chopped or crushed. You want the spices to be broken up, and the Dried Rosemary should have been pulverized into as small a powder as you can get it before you blend.  Probably need a Mortar and Pestle for that one but since I don't have one here, I chopped it by hand which was entertaining as they shot onto the floor.   Luckily the dog doesn't like Rosemary.

I let the blender run for more than two minutes.  Remember, the ingredients should be smooth and the spices should be evenly distributed.

Pour the ingredients into a sauce pan and heat.  You will want to keep this on low simmer.  It should slowly send a bubble here and there to the surface but must not go past a simmer.   Tomatoes will burn if heated and this goes for tomato paste as well.

I watched over the sauce, checking it every five or so minutes.  It simmered for an hour and reduced enough for me to call it done.  I put plastic over it and placed it into the refrigerator to allow the spices to meld with the sauce.

This literally was the best pizza sauce I have ever had.

That night I wasn't craving water because there wasn't a lot of sauce in the recipe since it was not a commercial sauce.  You won't miss it.  I didn't realize just how much salt is in those sauces until I was told by Kevin that he wasn't thirsty either afterwords.

The crust recipe is also on the blog as well as some of my other forays into building the perfect pizza.  It isn't perfect, I still have to figure out time and temp to get that properly crispy bottom to my thick crust but this is as close to perfect as I have ever had.

Oddly enough, it's also heart healthy if you watch that sort of thing.

Ok, enough of that blather... the recipe is as follows:

I still say you want to simmer it down to make sure you get the right consistency!
Posted by Bill at 9:50 AM