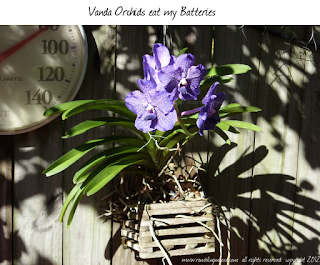 This is the Other Vanda Orchid.  I had the yellow one open up and bloom for me the other week, and it is still in bloom.

When this one opened up three days ago, I spent the time waiting just for the right sun angle.  It was either too high or too low.  Too much cloud or I wasn't able to get out there.

Finally when I go to take the picture, I look out set this shot up, squeeze the trigger and get it.

Oh bright idea, lets reposition and get it in on an angle and catch the yellow one.

The camera refuses and goes dark.

You see all those false starts over the last couple days ate the last pair of batteries that were in the house.  This beautiful flower ate my AA batteries.

That's the nice thing about being in the Dry Season.  You learn what you need in preparation for Hurricane Season.  Well that and you're not ducking flying coconuts and palm fronds of death.

So no more pictures until I charge up the batteries that I have for emergencies.

As for the camera, it's an old 8MP camera.  When it uses up the batteries, they still have enough power left for radios or clocks to run for quite a while.  I have a jar full of these semi used batteries with a black stripe on them so I know they're used.

Back in the early days of digital photography, the cameras used a lot more power.  They would eat batteries much faster.  As a result there were some interesting work arounds.

My first camera was a 1MP camera.  It was also a tank of a machine.  Built very solid, but very hungry since the electronics haven't been optimized.   One of the tricks some enterprising geek did was to get some wire and a battery brick of D cells and wire four of them together so he could use his camera to do long exposure pictures.

He then painted his girlfriend with red laser light.  Beautiful picture, she looked like she was made of rubies.  I'll have to try that sometime, maybe when I get those batteries.
Posted by Bill at 10:43 AM