A Once A Year Time Change Story 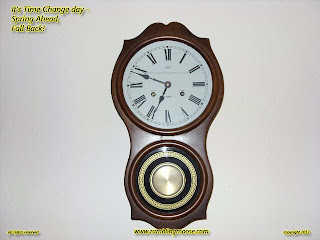 If you're like me, you were up at Stupid O'Clock anyway.

I tried.  Really I did.  I stayed up to Midnight last night.  Playing FreeCiv on my beater laptop I looked at the clock that said 11:58 and turned off the Soca music stream from London or Toronto or some other city chock full of the "Caribbean Diaspora" and their culture, pulled up the covers and promised myself a good long "lie-in" today.

When the irrigation pumps kicked in, I tried sleeping through it, but that just didn't work.

Time to start the morning ritual on a Sunday Morning.

Rack wasn't really into getting up either, but he did curl up neatly next to me as I put the collar and harness on him and walked him out for his breakfast bowl.

As I waited for him to finish eating, I set clocks.   More like, he'd stop eating because I would set clocks.

The internet radios, atomic clocks, and cell phones would all take care of themselves.  Quartz clocks were easy, just bump the thing ahead an hour.

Mom's Clock, a clock I picked up in the mid 1980s in a flea market in Pennsylvania as a holiday gift was tough.  It's a 31 day wind up that should be stopped in order to let the world catch up to it.  There's a kitchen timer sitting next to it that is counting that hour down so I had better finish my coffee in time.  I have a feeling I may need a second mug.

The sun isn't yet up.  It's not even awake yet.  The windows are open on the house, it's a cold morning at 69F, but the breezes are already cooling me under the ceiling fan that's turned off.

It happens every time change.  The birds outside are trilling out their morning song as it floats in on the breezes.  The pets aren't going to pay attention to Mankind's Folly of artificially setting clocks twice a year.  They'll wake up in their own time.  My own body does the same.  I'll eventually adjust to this induced jet lag.

Whether we adjust the clocks or not.
Posted by Bill at 6:28 AM