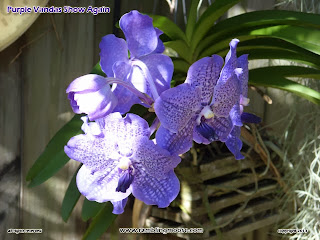 Oscar's close-up not withstanding, this was why I grabbed my camera this weekend.

The annual purple Vanda orchid bloom in my back yard.

The plant was one of those big box store buys.  It came in a little plastic bag with a tag that promised beauty and for most people it was promising a bit too much.  On the other hand, we have an excellent habitat for this plant.

Orchids can be painfully fussy to grow outside of the tropics or semi-tropics, but here, we put the plant in a box with some bark, connected a drip-feed irrigation line to the box and ignored it.

I fertilized it twice.  The last time was in 2012 during hurricane season.  It needed to be removed from its perch and dipped into a bucket of water with this weird blue powder mixed in and then placed back on the wall.   The problem is that the Vanda liked it so much where it was that the roots grew out of the box and onto the wall behind it.

The orchid is welded to the wall so it's not going anywhere so it won't be fertilized that way again.

We look forward to this blooming each year.  It's the second of the annual blooms.  The other orchids haven't opened yet, but who knows, they may still yet.   It's one of the benefits of living here on the quirky little island, you can grow weird plants like orchids.   Just strap them to a tree and give them water.  They like that sort of thing.