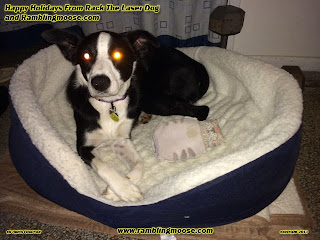 Happy Holidays - yes, all of them.

With Rack the Laser Dog staring his glowy eyes at you, may you have a wonderful end of the year, and a better 2014!

If Santa Clothes came by and left you a Yellow Polyester Leisure Suit with Lime Green Frogs, and a Lump of Coal, you are probably my nephew remembering his childhood.

You see one year, when my little nephew was a toddler, he learned about the Holiday ATM that is known as Santa Claus.  For months, Jon was telling us how he was going to get action figures, a new bike, and all the other things that a kid would want.

Then Thanksgiving hit.  We told him that Santa Clothes would come for a visit and bring him clothes for Xmas.

Predictably that didn't go over too well, but it did start a new family tradition.

Every year from that point onward, I made it a quest to find my nephew a lump of coal.  Even when he was a teenager, he knew that he would get a lump of coal in his stocking and some piece of clothing that he actually wanted from me, along with everything else I could find that he wanted for the holiday.

The lump of coal was a hard candy.  It tasted like licorice and he did enjoy it because he was in on the joke.

So maybe Santa Clothes will bring you a sock and a lump of coal.  You might just like it.

Especially if it was licorice flavored and came in a small bucket with a teeny weeny little hammer.

Mind you, one year I actually did find a real lump of coal and gave him one of his own along with the licorice lump and an article of clothing.  I think it was gloves that year.   He also got a haul of goodies that he really wanted but the gloves he used all that season - or so I was told.  Philadelphia and the suburbs get quite cold in winter.