A Flock Of Ibis and A Jar of Lemon Curd

When it rains like we have been getting, the best thing to do is just "Duck and Cover".

I don't mind a thunderstorm but I am smart enough to stay inside during the worst of it.  Most folks are.

There are always a few who you wonder about.  You know the type, I've called them chickens.  The type that if you set outside in a rainstorm, they'd drown because they would be looking "due up" at the sky with their mouth open.  It would then fill up and they don't have the common sense to at least swallow.

There was a gap between the storms.  You could still hear the thunder off in the very distance, like a low rumble from a distant train.  Humid out, with grey skies, it was clearly time to go out and get some errands run.

I had a conversation with Sherree a few days back.  We were paying a visit and made a casual comment that I was probably one of about one people here in town that made their own Lemon Curd.  If you haven't had it, it basically is what you get inside of a Lemon Meringue pie.  Subtract the crust and the meringue, and there you have it.   It's a sweet and tart jelly that is rich with eggs, lemon zest and juice, and is really quite good on a breakfast English Muffin with some cream cheese.  I've gotten the recipe down so that it's about as good as what I can get out at the market.  Oh, and as good as that recipe is, it is amazing with either grapefruit or limes, Key Limes are exceptional when you can find them.

But it also is an English thing.  Since Sherree is quite gloriously English, her eyes lit up when she heard that.

It was time to do a good deed.

That morning I knew I would make up a batch and try to can the stuff.   Home canning is one of those At Your Own Risk activities like running with scissors.  Do it right and it can be exhilarating.  Do it wrong and you fall down and hurt yourself.

There are certain foods that it is "Not Recommended" that you home can.  They are things that spoil easily that contain Egg that could go horribly wrong if you didn't sterilize everything in boiling water and follow instructions exactly.

Seeing that I was kind of winging this, I was going to deliver one of the two full jars locally that same day.

If someone gives you some Home Canned goods, check the lid.  If the lid bulges, it should no longer be eaten.  Dispose of it, then tell a white lie.  Tell them it was good, but don't eat it.  Save the ring and the jar and return them, they're not exactly easy to find.  The rings are almost never sold separately, and come one to a jar.

On the other hand, this jar was canned, and then immediately refrigerated, and went into the refrigerator upon delivery.

After chatting about her dog, and that my own Rack was sitting in the car out front, we came outside.  Having a pleasant conversation about things that you usually have when you're three adults and a dog standing around in a front yard, we were interrupted. 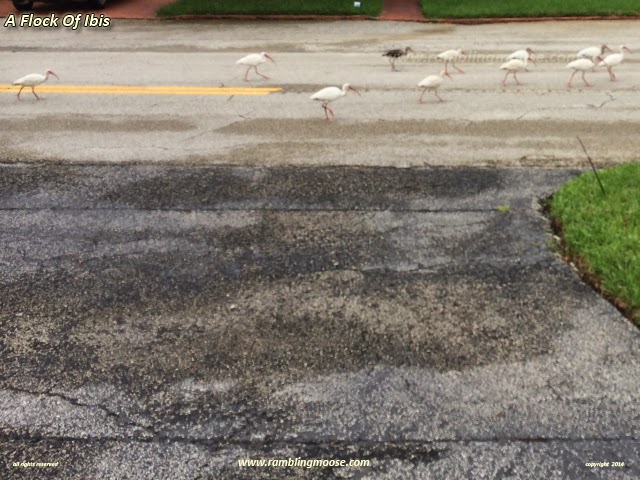 A Flock of 11 Ibises make a rather large sound when they come in for a landing.  We spotted them just as they crested over the trees and landed in the street in front of us.  Think of the Hitchcock movie "The Birds" but in miniature.  One thing about wildlife in Florida, they are everywhere.  You only reside here, but this is their home.

This flock paid us no mind as we all stood there with our heads cocked to one side due to their arrival.  They walked East down the street as my Rack hid behind me.  I'm not too surprised about that but when I noticed that he was plastered to the back of my leg, I dropped the leash.

He was in the back of the car and curled into a fetal ball in an eyeblink.

So if you're standing in a yard and a flock of American Ibis decide to pay a visit, remember they were here first and they're really quite shy.  Don't worry, they'll head back to the water shortly.  They can't eat asphalt anyway.
Posted by Bill at 9:48 AM