It happens that the other day my neighbor Bill needed to have his apartment bug bombed. 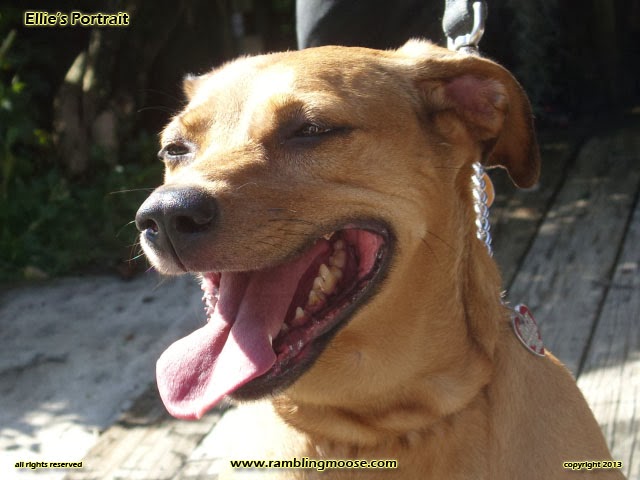 Since his dog Ellie and my dog Rack are friends, I got to play petsitter.

You'd think it would go well but by the end of the day I remembered the old Bill Cosby sketch about the woman on a cross country flight with a child.  The kid was hyperactive and trying to meet and talk with absolutely everyone on the plane.  By the end of the flight the kid who managed to annoy just about everyone it met was asleep.  So everyone who passed by knocked the chair.  When the woman got off to meet her husband she knocked him out with a punch from the frustration.

It wasn't that frustrating.  Besides, you can get through most situations like this.  After all it's only one day.

The original plan was to leave Ellie in the backyard.  You see, Original Plans never are what end up happening.

It's summer here in South Florida.  The high yesterday was forecast to be above 90.  You can't leave a dog outside in that heat in clear conscience.

I was getting all sorts of helpful hints from people who didn't realize that I was going to do what I thought was right for everyone involved.

Once the house was empty of extraneous personnel, I did what I thought was right.

First step.  Make sure the dog proof house was "strange dog proof".   I gave the place a once over.  Picked up the recycling from the floor.  Got that stray cheezy poof out of the corner, ran the vacuum, and closed off extra rooms.   That made life easier for me limiting where the two dogs could go.

Rack was going to be in the house as well.

Second step.  Ellie was in the backyard, tied to a long tether to the support beam to the Lanai.  She got here fairly early, and it was still what passed for cool here.  Low 80s in the shade. 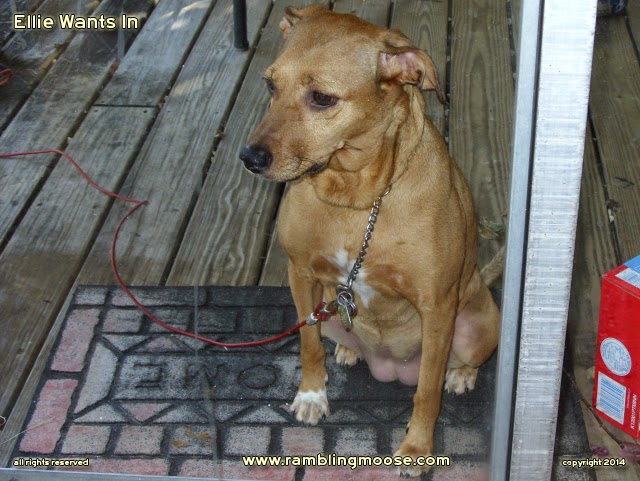 I let Ellie in.   Rather, Ellie guilted me into letting her in.  She got lonely in a strange yard.   She really didn't understand this nonsense of being tide up for any length of time and was impatient.  I started hearing paws tapping on my back door.  It's glass.  I had visions of an 8 foot tall glass slab breaking and falling into the house.

Ok so I exaggerate.

I parked myself at the desk next to the door so she could see me.  That just made her more insistent about coming in.

Third step.  The two dogs are now in the house.

She walked over to the parrot cage.  Knew something was going on but didn't see it.  Her nose told her what was up.  She just didn't look there.   Oscar, being a prey animal, didn't like the intruder so he barked at Ellie and flapped his wings.  That clued Ellie in.  The entire afternoon, every time she would pass Oscar's cage, Ellie would look up and sniff.

Oscar, you're not getting out time this afternoon.

If you have a dog, think back to the first day you had them.  The first day, the new dog will walk around and sniff everything.  Absolutely everything.  Then they will eventually mark territory.  Expect it.

What I didn't expect was how Ellie would do all of that.

Rack hid in his corner.  Ellie came over, sniffed him, moved on sniffing the house.  It would be about 3 hours before Rack would come out for that visit.  You see, Ellie is clearly an Alpha Dog.  That's fine, I rule this pack, I'm the Pack Leader.  I've got the chest for that T Shirt anyway!

Ellie having realized that Rack was happy being stuffed in the corner found me.  What I thought was friendly greetings of paw on my arm was a conversation.  By the time she stopped talking, I had a sore spot on my left arm from all that talking.  Gabby little woman, you are!

She got tired of talking and wandered off looking hungrily at Oscar on the way by.

You know that saying that parents have about the house being "Too Quiet"?  It was.

I walked into the main room.  There was a 10 foot stripe of recycled water going from one end of the house to the other.  My house was marked in the way that an elephant may use it's trunk.

Rack still hid in the corner.

Grabbing mop, floor cleaner, bucket, and 130F Water I found that I got a clean spot in the grout after I was done.  I'll remember that for later!

Not a happy camper but I did expect it.  So THAT was what you meant by the paw on the foot.  No more water for you, Ellie.  She seems not to have an off switch with that.

I pried Rack loose of the corner, and left the empty Ellie to have free reign of the house.  When I went in for my shower, she didn't want to be left alone so she parked herself on the bath mat.  Awww, sweet, but in the way when I went to step onto the bathroom floor.

I'm lucky.  Having been a long distance inline skater, that's Rollerblades to you, I slid across the wet floor and into the hallway, careening into the door at around 10MPH.

Lunch time eventually arrived.  I told Bill what was up.  He filled me in on the whole Paw on the Arm signal.  Thanks Pal!  You could have told me earlier!

Ellie was finally empty having been cut off from the water bowl after drinking and losing about a quart in the morning.  Really that's a new breed of dog called the sponge.  Soaks and leaks water where you least expect it.

I'll get that floor scrubber out later...

After Bill went back to his workplace, I had the two dogs free in the house.  Rack had stopped being so fearful and decided to come out to sniff around.  Ellie was bored.  Every 30 minutes she was in and out.  Rack wanted the yard too.

I didn't expect to get anything productive done this day anyway.

Eventually it got so they started to play.  I had two hyperactive midsized dogs.  What were they going to do?

The Alpha dog trying to dominate the Beta Dog.  The Beta Dog doesn't know he's a dog and doesn't speak that language well so he would try to herd the Alpha.  My coffee table got circled about 40 times.  Herding instincts kick in.  Rack starts to nip at Ellie's heels.  Ellie didn't care for that.  Ellie would stop and try to coax Oscar's cage open just by using Eye Magic.  Oscar's wings were wide open, he was lunging at the cage bars and barking.

Rack goes into the bedroom.  I drag Ellie outside one more time.  Perimeter search, no wet spots!  Paws on two doors at once.  Rack hears UPS truck and starts to grumble.  Ellie wants to play.

We have arrived at Bedlam, population: 3.

Kevin gets home.  Two jumping dogs.  Rack backs down when commanded, Ellie tries to charge at the door.

Nope.  Her feet scrabble on the Florida Tiles in the dining room like a windup toy trying to get a purchase.  The ritual of getting Kevin indoors takes 5 solid minutes.   I finally just let go of Ellie.  I was safe in my chair and Kevin was down a dog.

She runs across the room in a fawn colored dash sliding into the door at full force.

I guess she likes you.

15 minutes later I had enough.  Time out again.  I took Ellie outside.  It was now 6pm.  Bill would be home in about 15 minutes.  She'd have the last half hour outside.  Temperature was down to 83 in the shade.

Even Ellie had had enough, she just collapsed on the cool grass under the bougainvillea.

The big black pickup truck was rumbling home from a block away.  Bill got in.  As soon as I knew I could hear that large inline six cylinder engine, I noticed that Ellie was out back at the door rattling around sounding excited.

The visit was ending.  It was time for normal again.
Posted by Bill at 9:28 AM