Linux - Cloning Your Hard Disc on RaspberryPi and Raspbian

For a credit card sized computer, it's been getting a lot of abuse.

I've been installing and uninstalling software since I got the thing from my buddy Craig in Atlanta, and not always having success.

Instead of completely reloading the operating system from the "official" image, I decided to do a backup of the computer.

Boring stuff that anyone who uses a computer on any operating system should do on a schedule.

While Windows can be made automatic, it's fussy.  You don't have the control over the operating system like you do in Linux, any Linux.  Anything I am doing on this little credit card sized computer, I can do on my bigger Thinkpad T60 laptop that is running a very similar version of Linux.  I would expect these same steps to work on my Debian computers, as well as any derived distribution like Ubuntu.   Just check your "switches" to make sure they "comply".

That's the strength and the weakness of Linux.  There's so much flexibility it's confusing, but in the flexibility you can get the operating system to do what you want and exactly what you want.

But you have to know what you're doing.

Since the RaspberryPi only had an 8GB SDHC chip for it's "disc drive", it would be small enough and easy enough to backup.  Since it is Linux, why not just make a complete copy of the operating system and all the user data?

What I did was to cheat.  I did it from the desktop of the RaspberryPi.
Why is that a cheat?  Because files "could be left open" which means you are never 100 Percent Sure that everything gets copied.

The solution with the Raspi is to go into "raspi-config" and set the switch  in "Enable Boot to Desktop/Scratch" to go to "Console Text Console".  That will put you in what we used to call "Single User Mode" and everything will be closed and there will be no doubt.

But, Me?  I'm cheating and it turned out fine.  No corruption and I was able to switch chips (hard drives) and it booted from the cloned chip with not a problem in the world.

On the other hand, I will be using these instructions to do exactly this on my "real" Linux laptop, an older Lenovo Thinkpad T60 machine.  I have the spare hard drives there too and why not?

When that is all done, the dd statement will tell you how many records were copied in and out, and the record counts should be the same.  It will also tell you how large your chip was - here it was 7.9 GB.

If you want to test your clone, shut down your computer via a "shutdown -h now" in your root terminal, swap chips, then reboot. 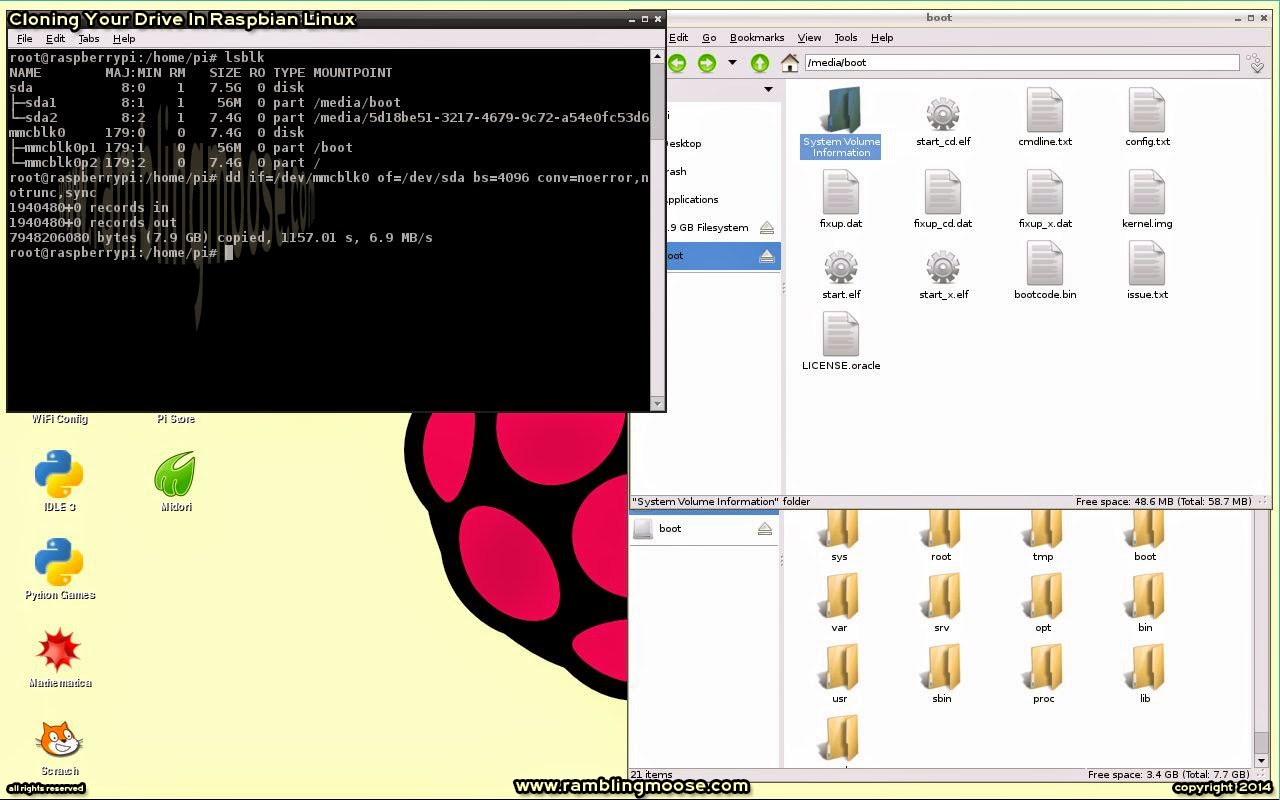