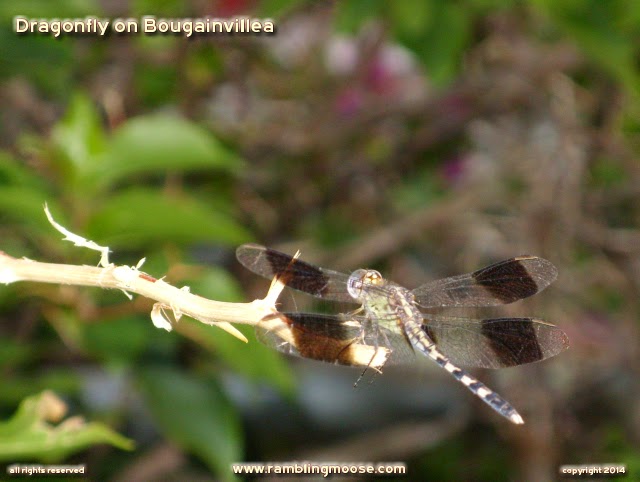 There's something about a rainy week that brings out something new here.

First the new mosquitoes.  Hide inside for a day or two at dusk and sunrise or you'll end up feeding your very own flock of pets.  Trust me on that one.

Then two days or three perhaps, later, they arrive.  Gliding on the breezes, hovering over land and suddenly veering off to a random direction and gone.  Other times they'll swoop over any body of water for a drink.  The only way you know they got there is the series of small rings that show on the surface from their impact.

Dragonflies can be quite large, but this one wasn't.  It was basking in the golden hour, about an hour or two after sunrise, collecting its insect thoughts, perhaps pondering where would it find its next meal of tasty mosquitoes.

Tasty because they're fed by me, that is.

But breakfast hadn't shown its head either.  The air was clear of them, or so I thought.  My own hide not having been pierced yet, nor have I been considered a landing strip of the nasties.

This particular little jewel simply perched on a denuded branch that I created by going after the long vines of the bougainvillea hedge behind the Florida room.  Dragonflies will do that.  Instead of perching somewhere that you would expect them to on a more sturdy part of a plant, they'll edge out to the very tip and stand there looking serene and beautiful.

It also didn't seem to care that I was looking at it.   I was able to go back inside the house, having forgotten the rule of always bring your camera, and get a series of about 10 pictures.

All the while smiling at its beauty.
Posted by Bill at 9:37 AM