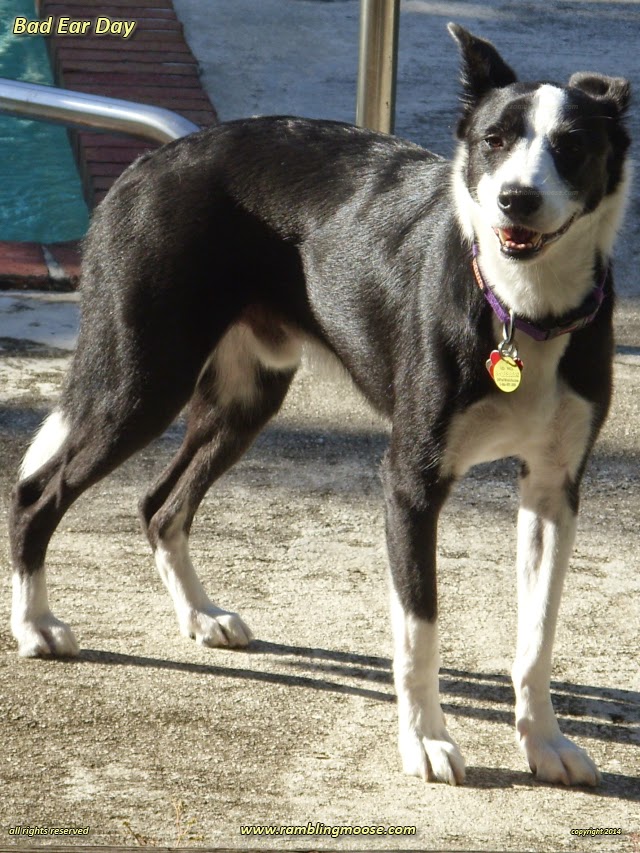 There are just some days that you have to go with the flow.

Actually that would be every day.  You can't control everything, that is the job of a Border Collie.

I don't have a Border Collie, I have a Mc Nab Dog.

Mc Nabs were bred from the same "source" dogs as a Border Collie, but they were bred for a different temperament and different conditions.  Their native Mendocino County California is a warmer climate than the Border Lands of Scotland and England.  Divergent needs mean that my own Rack has webbed feet and no undercoat.  He can take the heat better than a Border Collie, and will plop himself in the full sun of a South Florida Summer afternoon to recharge.

Solar Cells tend to be black as well.

A Border Collie is a wonderful dog, but they never rest.  You must give them work or you become their job.  It is up to you whether you want to be awakened at a strange hour for a five mile run.

A Mc Nab is more patient.  He'll lay there and watch until you're ready, then ask "What are we doing today, Boss?".

That would be my Rack.   He learned my routine, sometimes I think a little too well.  He also tries to convince me that his way is the best from time to time.  Quirky little beast, to say the least.

On this particular morning in question, I happened to get up at a normal hour.  I still beat the sunrise by a half hour or more, and that was enough in itself to set my entire day later than usual.

While my own Mc Nab tends to act like a Business Analyst, he takes a subordinate role to my own Project Manager mindset.   It fits well, but I do have my own tendency to "Over Plan" things.

Knowing that routine gets him confused sometimes.  He's got some habits that are making me do some things with food that I realize are not for the best.  A bit manipulative?  Sure, but show me a dog that isn't going to work their way into your lives and your heart - if you don't have a heart of stone.

I finally got him reestablished on a normal eating schedule the day before.  Too many Summer Wet Season Thunderstorms had him rattled to where he hid the entire day under a table, in the corner, in a fetal ball.  When the rains broke, I was able to get some errands done.

Who knows, it may even get dry enough to get that yard work done.  After all, things are growing faster than I can get the weed eater at them.

The next day he must have realized that he could do a little campaigning.  Unfortunately, I was also taking advantage of the dry morning.  I had run out of coffee, and unlike you, most likely, that means I need to roast more.  Roast today, Drink tomorrow is the rule.  Get the popcorn popper out, pour a half cup of green beans into the hopper, plug in and wait for Second Crack for a lighter roast.

Since I was preoccupied in the kitchen, my mutt decided he wanted to go outside.  You see him going outside makes yogurt magically appear.  He had left half of his food in the bowl.  That bowl normally gets partially eaten, then I spend the rest of the day placing it in front of his nose telling him to eat.  If I get frustrated, I pour a tablespoon of yogurt on top and mix it in.

That leaves a half bowl of yogurt encrusted dog food and one happy dog.

I had him outside and was doing my best to ignore him.  Kind of difficult, if you ask me.  He's looking at me through the window.  I'm entertaining him as I dump the roasted coffee into the "cooling jar" and stir them around to let them cool.  Grab my own first course of breakfast, and he's still staring at me through the window.  It is as if he's saying "Soon, my precious yogurt will appear".

Yes, but not for you my furry charge, not yet.

The entire half hour of breakfast, coffee roasting, and my own puttering was spent with this dog staring back at me.  Every time I looked, the one ear was down.  His down ear never completely stood upright, and the upright ear isn't quite as bolt upright as some other Mc Nabs are.  But since this is a breed that the standards are set more for What They Can Do rather than What They Look Like, it certainly doesn't matter.

Besides, that "down ear" works and looks comical as he bounces around the neighborhood on his daily march.

I'd finally had quite enough of being stared at.  The yogurt hadn't even hit the bowl yet.  I still had one course to go, and since I was at a logical breakpoint, I'd let him in.

Squeezing past my legs through the partially opened door at the back of the house, he shot through to the kitchen.

If a dog can show disappointment, this was when my own Rack decided to show it.  There was an enclave of food in the bowl.  Half of a bowl full of dog food sat packed to one side with an invisible border through the middle.  That is to say, dog food but no yogurt.

Yet.  Maybe Later.   Eat your food you silly dog!

He slunk off to his alternate den to tend to licking those webbed feet.   Dog food, no matter how premium it is or isn't, is just not as attractive without the remains of my own breakfast yogurt on top.