When I was a wee brat in the prairies of South Jersey, we used to explore the nearby woodlands.  I lived near a small river, or "Crick" in our way of speaking, and there was a pond that fed it.  There was a spring that fed the pond and we had lots of things to explore.

Nothing like telling a kid that if you toss a rock at some Skunk Cabbage, it will smell bad so don't do it.

We would go out in the wrong kinds of shoes, get covered with a thick layer of mud, root around looking for the Salamanders we were promised we would find there and never did.  Turtles were everywhere, and of course, frogs.

Green Leopard skinned creatures.  Completely harmless.  Kids would practice catch and release because once we got them, we really couldn't think of anything else to do with them.  The turtles were a bit more exciting because they could snap and bite so "Don't get your fingers too close to that mouth or else!".

One time Icky and Mark caught a snapper turtle that was as big as a hubcap.  Ornery critter that wanted to tear some of us apart.

I was not thinking about any of that this morning.  I was sitting in the chair debating breakfast.  It was an hour still before sunrise when I heard some rattling around out the back window.  I'm used to that.  We have lizards that crawl into the mounts for the hurricane shutters and think it's their home.  You'll hear some scrabbling around when they wake up in the morning, and some more scrabbling when they return at night for shelter.   I'm fine with lizards.  The ones we have here are harmless.

Right in a lull of the music I was playing I heard a sound that was like what you hear when you drop a steak on a counter.  Like someone slapped some meat on my window.

Looking over my left shoulder I looked and didn't see the culprit and went back to opening and closing web pages and mulling over whether I should have strawberry or pineapple jam in my yogurt.  All the important things in life, right? 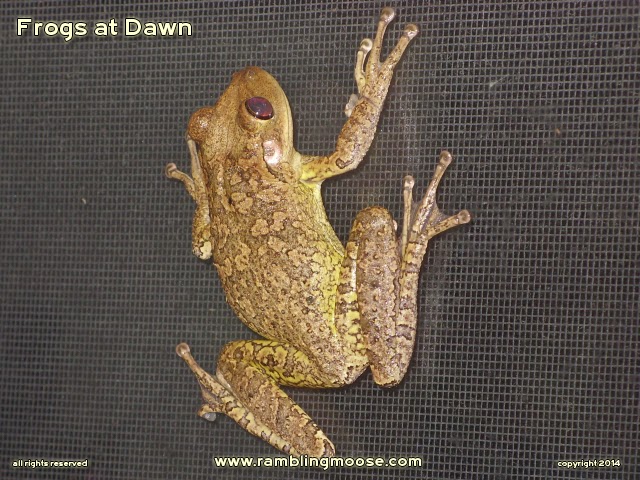 When I heard it the second time, I spotted something on the window.  A distant relative of an old childhood friend.  You guessed it, there was a frog stuck to the glass on the outside of the window.  The sun was starting to think about rising.  There was a purple gloom in the skies that backlit that creature.

So why not, lets go out with the camera and see if we can annoy a frog!

The little thing didn't like my own bulk approaching it.  As I got too close, it started to move on the window away from me.  It was on the glass, and the screen was on the other side.  It was stuck to the window as Frogs would do.

I got the second shot and it started walking away.  Who would really want a strobe light flash at just before sunrise?

The camera wasn't smart enough to see the frog in the light, it was telling me that it was a low light so I shifted around and got the final picture when it realized it could focus.

At that point the frog was gone out of my life just as quickly as it came into it.  It had had enough.  I heard the bougainvillea arbor rustle and it left.  I had my pictures and I didn't have to worry about sliding into the mud by the pond on the little creek.

Walking into the house, it was time for breakfast.  I think Strawberry jam will do the trick.
Posted by Bill at 9:45 AM