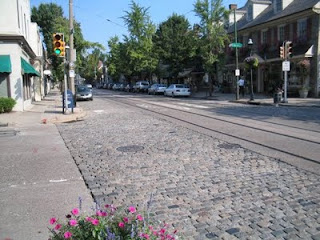 I had the fortune of living a block from where this picture was taken.   This is the corner of Highland and Germantown Avenues in the Chestnut Hill section of Philadelphia.   Taken July 2004.  Ok, I just repeated the title of the article.   I would walk through this intersection just about every day on the way to the train to work for 13 years.   Every time I walked through there, I looked around and thought how fortunate that I was to be in a neighborhood like this where people cared for things.

Interesting place though.  They were proud to say that this was like an English Country Town in the middle of one of the largest cities in the United States.   I'd say they're right.   I've a British Ex-Pat friend who lives in Key West, David, who has said exactly that.  The place looks like a Traditional High Street from the Countryside.   The lay of the land when you get off of The Avenue and walk southwest toward Fairmount Park gets more wooded and eventually full forest in the Park.

I moved away April 2006, have been away ever since.   I've had reports that the business district is suffering Bush's Depression much stronger than many other areas since this was a collection of One Off Shops that sold typically a superior level of goods.   Just before the crash, the place was invaded by Banks.   We all know what happened there, most of them had closed leaving their hulks squatting on prime real estate, and since they were modified to a Bank's purpose, it leaves me wondering what will eventually go in when the Obama Boom comes.  Now I hear that Borders Books is closing their store at the Top of the Hill.  The problem isn't that Chestnut Hill's Germantown Avenue is a bad place to do business, the problem is that they are a collection of independent commercial shops rented from various people and as such you end up with no cohesiveness and no "flow".

I hope it can go back to the One Off Shop era, it was a wonderful experience living that close to it.