A Birthday Dinner at Mai Kai

Feel like a meal that is going to be probably the best one you have ever had?  Do you enjoy a setting that looks like something out of Gilligan's Island?  Want to be entertained by a wonderfully quirky waitstaff in a one of a kind place? 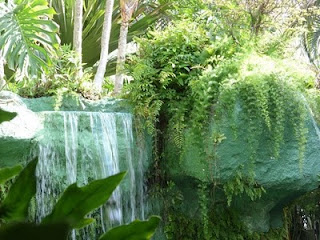 I did.   I was taken to Mai Kai Polynesian Restaurant in Fort Lauderdale for my birthday yesterday.  The place is truly amazing.  It actually was the third time I had been there.

Each of the three times I had been there, they sat me outdoors under the awning at the same table.   Odd coincidence, and a happy one for me.   The view from the table is what you see in this picture.  I looked over my right shoulder and saw this fountain that looked very much like my memory of the waterfall in the series Gilligan's Island.  This is a good thing because that particular water feature is simply one of the most beautiful ones that I have ever come across.

That yard is chock full of statues, plantings and beauty that will enthrall and entertain you.  As you wait you can go and visit the gardens that have also in it a one of a kind Chinese Oven.  The food is hung from a hook and will be cooked vertically within a giant ceramic chimney.  I don't know how they train a cook onhow to use that thing, but they trained them well.   I had ordered a Barbecued Pork Tenderloin that was served with a serving of Mashed Potatoes that was the best I have ever had.  It was so well cooked that I simply never had to put knife to it.  The medallions of pork were easily sliced by fork and melted in your mouth. 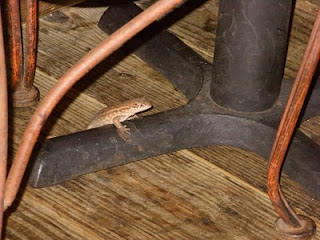 While eating I was visited by this little critter, a Curly Tail Lizard.  He wasn't on the menu but he was quite unexpected.   Seems like they all didn't die over the winter.  Since I was out under the awning on this beautiful evening, I expected to be visited by these little guys and I was not disappointed.  Between the courses, you can wander the gardens or sit back and see the local wildlife come right up to the table.  During the courses, while the critters are amazing, you will realize that the food is way more entertaining than the little lizards.

Mai Kai is known to be a local landmark.   A one of a kind restaurant that is of the utmost quality.  Every detail is taken note of and made so that they enhance your experience.  You may not need the Barrel of Rum drink, but if you do get one, the rum is top shelf and smooth.  My "Yeoman's Grog" was smooth and wonderful and had I stood up I'd have fallen over immediately.  They do have more pedestrian strength drinks, and even non alcohol ones so everyone's taste is taken into account.   Perfectly.   I have never had a single thing there that wasn't flat out amazing. 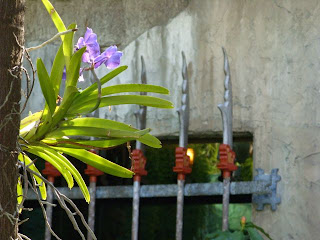 Between the dinner and dessert course, I did take the time to look around and not miss out on the beauty around me.  This is a Vanda Orchid that is simply stuck to the side of a palm tree in the garden a mere couple feet from the table.   In the background you see the bars protecting the window for the Chinese Oven.  You wouldn't want to fall in there while looking at the surroundings, and while tours can sometimes be had if you know someone in charge, you are protected by these rather severe looking metal bars.

Indoors you can pay to see the Polynesian show if they are running them, otherwise they'll put you outside for a more natural show by nature.   I'd say do both.  I haven't seen the Polynesian show other than on the way out to the car, I've been too blown away by the gardens and all the water features.

On the other hand, the Waiter we had was our own personal show.  The rest of the staff must have agreed because when he came to give us our dessert, he became their entertainment too.   We ordered a Cherries Hawaiian dish that arrived at the table to be assembled.   First you spread the cherries out on a plate, set the ice cream next to it and then dip a spoon into a small pitcher.   The pitcher has an alcohol that will be lit and poured over the cherries to warm them.  Traditionally either Rum or Brandy, the fire will gently warm the cherries as they are spooned to burn off the alcohol.

That would have been the plan except our waiter was having a horrible time fighting the breezes that were coming in off the ocean at the time.  He was terribly embarrassed and that was adding to the value of the entertainment that we were getting.  When we looked away from the blue flames that finally rose from the red cherries, there were about 10 of the staff looking at him having terrible difficulty getting the flames to catch.

Third time wasn't the charm, more like the fifth but it gave us a great time while watching him go at it.

This is the third time we got to go there.  I'm glad I got to go.  I didn't get the birthday special and I don't even know what it would be.  On the other hand, while it is a bit more expensive than the run of the mill restaurant, the quality is simply amazing.  With two people, drinks, dinner and dessert expertly prepared and served was $65.  Plus Tip. 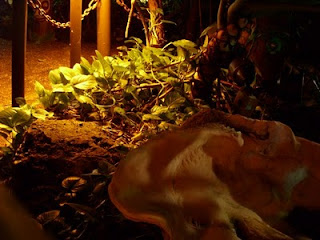 They are running a Two-Fer special right now, and it won't be forever so go there.  Go sit outside, bring your camera.  If you are there after dark, the lighting they have is simply breathtaking.  You are looking at a giant Clam shell and some plants that were next to the table. This was a welcome addition to my time there, and the rest of the features of the place are even more beautiful.

Go and have a meal there.  You'll have an experience that you will remember for a very long time.
Posted by Bill at 8:00 AM